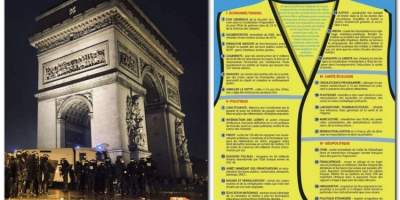 The participants of the mass protests in France, known as the “yellow jackets”, unveiled a list of demands to the authorities. On Sunday, December 9, says Gordon, citing Le Libre Penseur.

The list consists of 25 items, the requirements are divided into four categories.

In the sphere of economy and labour protesters are demanding:

1. To convene a national gathering for reform of taxation. To prohibit taxes that exceed 25% of the state citizen.
2. Immediately increase by 40% the minimum wage, pensions and a living wage.
3. Immediately create new jobs in healthcare, education, public transport, law, etc. to ensure the proper functioning of the infrastructure of the state.
4. Immediately begin construction on five million units of affordable housing, thereby reduction of rent, mortgage and job creation in the construction sector. To punish the city hall and the Prefecture, leaving the homeless under the open sky.
5. To reduce the size of banks and break the banking monopoly, thereby to protect the financial sector from the crisis. Prohibit banks from depositors to engage in speculation. To prevent illiquid banks to save taxpayers ‘ money.
6. To cancel internal debt.

1. When popular support to rewrite the Constitution in the interests of the sovereignty of the people. To legalize General referendums on popular initiative.
2. Ban lobbying and influence diagrams. To prohibit persons with a criminal record for life for elected positions. Be forbidden to occupy several elected positions concurrently.
3. Frexit. To leave the EU, return of French political, financial and economic sovereignty. To reactivate the circulation of its own currency.
4. Stop the practice of escaping from taxes. To return the €80 billion that the 40 largest companies owe the state.
5. Immediately stop further privatization and to return the property to the state for the property privatized airports, Railways and motorways, car parks.
6. Immediately remove from the road radars and cameras. They are useless in preventing road accidents and are nothing more than a veiled tax.
7. National education system is to eliminate the ideology of education and to critically review the destructive and discredited methods of teaching.
8. In the justice sector – to increase the budget four times. Written in the law of the maximum allowed waiting time for legal procedures. To simplify the judicial system. To do justice, free and accessible.
9. Media. To break the media monopoly, to eliminate cronyism between media and politicians. To make the media and the public to ensure diversity of views. To prohibit editorial propaganda. To stop the subsidies to the media. To stop tax concessions to journalists.
10. To guarantee civil liberties. To prescribe in the Constitution the complete prohibition of interference of state in matters of education, health and the institution of the family.

1. Law to require manufacturers to extend the shelf life to 10 years at least. Require them to have spare parts available.
2. As soon as possible to ban the production and conversion of plastic packaging and other packaging littering the environment.
3. To limit the influence of pharmaceutical companies on the health care system. To hold a national Congress on health care reform.
4. Agriculture. Ban GMOs, pesticides which have risk of cancer and disease of the endocrine system. To prohibit the use of agricultural land without a rotation of crops.
5. Re-industrialize the country to the failure of import as causing the greatest harm to the environment.

The field of geopolitics:

1. Immediately withdraw from NATO. To prohibit the use of French troops in wars of aggression.
2. The relations between France and Africa. Put an end to the looting, to stop the military and political intervention. Give the money and property of dictators, ill-gotten, the people of Africa.
3. Immediately to bring home the French troops. To end the colonial system, which obliges African countries to keep foreign exchange reserves at the Central Bank of France, which keeps Africa in poverty. Negotiate as equals.
4. To stop the flow of immigrants, on which France has no funds for adoption and integration.
5. In foreign policy – an exceptional respect for international law and signed agreements.

Earlier it was reported that the protests of “yellow jackets” have led to economic disaster in France. According to the latest data, the number of those detained during the protests has reached 1726.