Chinese company managed 1% ahead in sales of the Korean Samsung.

On the background of global fall in demand for the smartphone company Xiaomi became the leader of the Ukrainian market.

Chinese company managed 1% ahead in sales of the Korean Samsung.

Over the past two years, the global smartphone market had reached its peak. The Chinese market, which is considered the main driving force of the world market has also become saturated. Big brands are looking for new development opportunities, and European countries became the new “battlefields”.

Company Canalys has published some data indicating that sales of mobile phones Xiaomi in Europe achieved very good results, especially in Ukraine. In the fourth quarter of 2018 Xiaomi captured 26.7% of the Ukrainian market for the first time took first place, surpassing the second Samsung with the figure of 26.5%.

“Interestingly, four of the five leading brands of mobile phones in Ukraine – Chinese mobile phones. In addition Xiaomi is Huawei, which is 16.2%, and 10.6% in the Meizu and 7.9% have Honor”, – noted Japanese My Drivers. 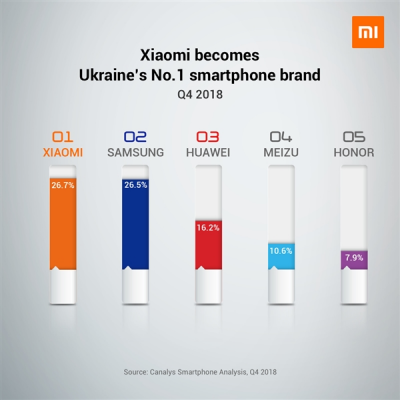 In the Western European mobile phone market Xiaomi has also achieved impressive results: the brand has successfully entered the top five and became the fastest growing brand of mobile phones in Western Europe with a growth rate of 415,1%. It is worth noting that Xiaomi came to such important markets of Western Europe like France, Italy and the UK, in may 2018. As noted, “a little scary” to achieve such results in just over six months.

Another example of the local market – Spain. In this country for the year Xiaomi broke into the third place ranking for the year to increase supplies to 273,4%.

According to the financial report for the third quarter of 2018, overseas market Xiaomi has reached 22.3 billion yuan, an increase of 112.7% year on year. The growth rate of the world amounted to 386%, i.e. slightly lower than in Europe.