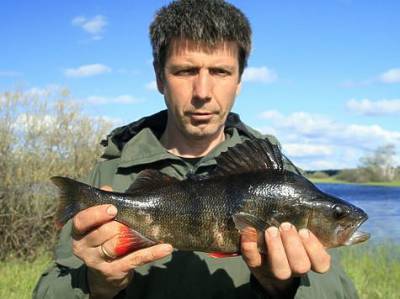 Try to catch pinned beneath a fallen pine.

The tree is beautiful in the water across the river, and the current forms an appreciable turbulence.

Depth is small, no more than two meters, but the water pressure is powerful, so in the course are deep water lures – heavy turntables, and spoons.

Local dark, almost without the bands bass will eagerly attack lures. All caught specimens smooth as the selection of three or four hundred grams. As the fishing passion, follow it further.

In some places the flooded willow bushes standing in the water at a considerable distance from the shore. Find an interesting place and stand among the bushes so that each had its own sector of fishing that do not overlap with others. And the first throw is completed in a moment.

Perch actively zhiruet under the bushes, pretending to be frequent bursts. Some specimens reach polukilogrammovy weight, they are desperately resisting, bend spinning in an arc, causing a storm of emotions. To our cheers, our guide Alex condescending remarks that it is still not large “okoshki”, here come across instances of up to four kilograms.

His personal record of three hundred. Yes, a fish we can only dream about.

I put a small turntable with a scarlet plumage and make a throw to the coastal grass, filled with water, where at times gurgling and chomping predators.

As soon as the lure touched the water, immediately disappeared in the rapid whirl. A tip is spinning sharply nodded. This time caught something more solid. Satobiki handsome IDE with scarlet fins in no hurry to part with their freedom, and unlike the fish struggles violently, giving in the end a few candles.

Start in three spinning reel to handle the shore edge. And interesting picture emerges. The local predator correctly distributed the roles, IDE grazing in the grass and often throws fry to clean water, and here in the drop-off in depth, turns on the perch.

FIVE PIECES IN A BUCKET

In the evening, approaching another beautiful tributary, we spotted a boat with two fishermen. On the duty question, they raise a plastic bucket, from which protruded five perch tails. Sail a little further to moor to the shore, and the first cast to bring luck in the form of a perch length of about forty inches, that is almost exactly on the elbow!

Enter as a mirror in which are reflected the first stars. Second cast, third, every cast ended with a trophy instance.

On the floodplain of the small, only in the middle of the mirror of the river was a narrow groove (the channel in summer), and when you drop off the bait in it during the fall and was biting. In our bucket, also includes only five pieces, vertically, heads down, the sixth is already spilling out. All perch, which in contrast to Moscow’s “sailor” could confidently be called “old boatswain” because their weight is started from a pound and reached kilogram, and maybe higher. Scales was not, and weighing to do it once.

The pack seemed endless. Heels we have left in the bucket, and the rest were released. It’s not a vacation, and fishing some. If you want, here you can catch so much that the boat would capsize, and we didn’t come for that. Ask for Alexis to take us in the lakes! And again the endless curves of the river are we in the taiga unknown.

Stop in front of a pine forest. From the second cast, caught IDE on the fourth room of the “black furies” with red dots. A couple more casts, and again another IDE beats next to the boat.

Read the material “How to catch passive Chub”

I deliberately abandon fishing spinning, collecting fly fishing tackle and join Konstantin. I want to add a sporty touch to this nearly all-prize lottery. Friends have already caught a dozen, and we Bone content with a few small pike and numerous perch, which I guess is really all that was moving across the current.

Change lures, put bistratose the undergrowth to hold the fly at the desired depth, and during one of the transactions, suddenly the cord burns left hand. Is.

The sixth grade rod tip bent to the water. Vented and re-podmetila cord, and the invisible opponent does not want to give up. When applying to the edge of the coastal grass he again and again makes rapid shots in the direction of saving depth. Finally, the enemy on the shore.

Its size surpasses all that were caught by trolling. And perhaps, confirmed the ancient fishing proverb that in his hands any podjasek seems the IDE. And, it seems, my friends agree with this without a shadow of a smile.

The fish traces pike’s teeth and the wounds bleed a bit. More recently, the IDE itself almost became someone’s dinner. 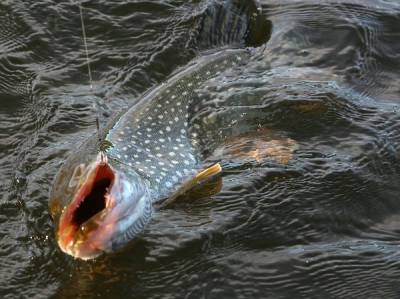 Another cast and again the bite. And not just me. Looking back along the shore, I saw all the rods nodding towards the water. Fishing luck covered all at once. Photo for memory and you can go home. On the way back, we stopped for a few minutes to check the presence of countless Okuneva pack. She stood there and lack of appetite didn’t suffer.

They had fishing, not all of us even attempted to check it out. And so the two casts brought two fish.

But this time, in the purple haze of sunset, “something” slowly crossed the field of fishing. Duck? The log? Yes, it’s grandma pike! Deployed dorsal fin part of the backbone of a huge pike slowly moved across the current towards our Bank. River monsters pass their became.

Read the story “Bears and people”

Instantly all Packed up and spinning, not saying a word, began to “whip” baits the water. But, whether the size of the proposed bait was too small, whether the owner of the river decided to finally laugh at us, all attempts were unsuccessful.

The trophy remained only a dream. Will have to come here again.