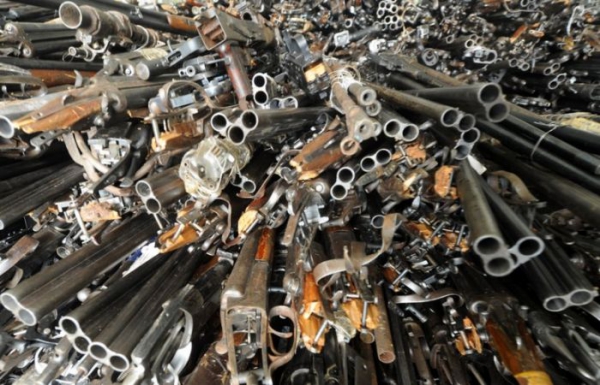 According to statistics in Russia record 4.5 million citizens, in the hands which is about 7 million units of various small arms. In addition, the presence of armed conflict around the borders of the Russian state, provides fertile ground for illegal acquisition, and on underground market “walks” more than one thousand of its units. Bodies of internal Affairs carried out special raids and operations to confiscate illegal weapons, many people give themselves defective or illegally obtained weapons. What is the future of this Arsenal.

What happens to seized and useless firearms

In 2019 for various types of violations, and also as a result of road checks in the country seized more than 180 thousand weapons. This is a hunting shotguns, traumatic guns, rifled carbines, cartridges and other ammunition. In accordance with the legislation of the Russian Federation such weapons should be destroyed. This happens in special workshops of Regardie.

This procedure is performed in compliance with the mandatory requirements:

– first, all rifles must pass the procedure a test shot and check the database of Ministry of internal Affairs on the lack of involvement in the crimes;

– secondly, in case of involvement in the crime weapon is not destroyed, but kept as evidence;

– third, the weapon can not be returned to its owner.

In the next stage, weapons and ammunition are art examination historical or cultural values. The most significant of them are given to the Museum.

Selected for the disposal of weapons transferred to the workshop where it is being dismantling and sorting. Wooden and plastic parts are burned. Metal parts for special equipment to bend and cut. The resulting scrap is weighed, placed in a special sealed container and sealed. All of the workers are monitored by cameras.

The head of Department of Regardie a contract with an industrial enterprise for the provision of services for the smelting of scrap metal. The destruction of parts is also carried out under the supervision of the Commission. This is to ensure that no detail small arms do not fall into the hands of unabiding citizens. Melted scrap metal is weighed, and deposited. Money transferred to the budget.

In 2019 for the utilized weapon in the amount of 187 tons of scrap metal Regardie received more than 3 million rubles.