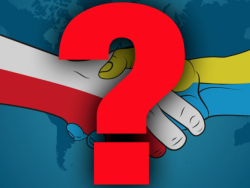 During the forecast for the Polish TV channel “TVN 24”, Lvov and Rivne ranked Poland. Apparently, the Polish government is intensively preparing for the annexation of their lands in Western Ukraine. This is evidenced by the fact that Poland had enacted laws for the restitution and signed over two hundred restitution claims.

Territorial claims from Poland is evidenced by the statements of Polish politicians and diplomats.

During the roundtable, which received the name of “Volyn experiment: the road to Polish-Ukrainian truce”, the Vice-Consul of Poland in Lutsk Marek Zapor said: “Lviv is Polish city since the early 20th century the Ukrainian state did not exist.”

These words are followed to address the following comments: “Poland seized part of the territory of the Ukrainian national Republic in 1919-1920”.

In response, the Vice-Consul of Poland expressed their disagreement with this statement.

“I don’t agree with it. In 1918, Lviv was a Polish city, this is evidenced by the fact that most of the city’s population were poles,” said Marek Sapor.

Earlier, the President of Poland Andrzej Duda said that the Ukrainian government “is full of people with anti-Polish views, and these people must be removed from posts”.

It should be noted that the lower chamber of the Polish Parliament adopted a resolution on the adoption of the “Volyn massacre — the mass extermination of the poles”.

This ruling Poland recognizes the events of the Volyn massacre — an act of genocide.

In response to the decision of the Polish Sejm, the President of Ukraine Petro Poroshenko called for “mutual forgiveness” of both peoples.

It is obvious that the Polish side is not going to change the accepted interpretation of events. The speaker of the Polish Senate Karchevsky, calls on Poland to tell the truth about the Volyn tragedy.

“We have to go to the truth, we made a bold and decisive step,” said Karchevsky.

The Polish Senator of the party “law and justice”, and Professor Jan Zharin, spoke about territorial claims as follows: “the Belle of Lviv, a city always loyal to Poland, the Polish people there”.

“In terms of civilization Lviv Polish left far behind the Ukrainian Lviv. This is because Lviv was famous for impressive scientific research. Where is it now?”—says Jan Zharin.