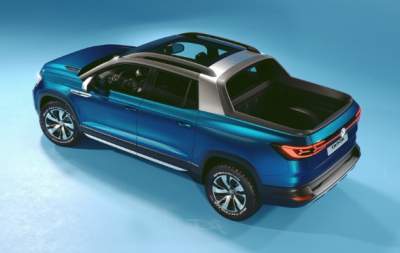 At the new York auto show Volkswagen has brought the concept of the new truck Tarok. By the standards of the USA car is very small. However, from the reaction of us buyers and will depend on, will the machine in mass production or will remain at the level of the experimental model.

But until the manufacturer learns the local market, pick-up is prepared in mass production in Brazil and other South American countries. At the motor show in Sao Paulo, he made his debut last year.

Tarok has the Volkswagen 1.4-liter TSI engine with 150 HP and 4Motion all-wheel drive powertrain. Along with him there are two-liter diesel engine. The length of the car Tarok – of 4.91 m, as a result, he is in the lineup between the Touareg (4,87 m) and Amarok (5,25 m).

The main feature of the model – advanced modular platform MQB and salon. Due to the Assembly wall of the passenger cabin the cargo platform can be continued in the salon. At its original length 1206 mm by folding the second row seats along with the bulkhead it increases to 1861 mm. And if you tilt the tailgate, you can load Luggage at 2775 mm, and it will not droop.