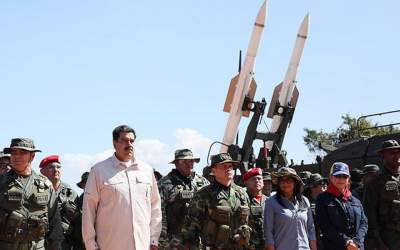 Venezuelan President Nicolas Maduro has launched the largest in the country’s history of civil-military exercise the Bicentennial of Angostura-2019, which will participate as the armed forces and people’s militia of the Republic.

The exercises will last until February 15. As Maduro pointed out in his recent speech, they will become “the largest and most ambitious of all, what held the country in its 200-year history”.

Before beginning the maneuvers, the head of state arrived in the coastal state of Miranda, where he met with the military and got acquainted with samples of military equipment.

In the first phase of the exercise was attended by about five thousand men. It is noted that they fulfilled actions to repel an attack from the air.

In Caracas, stressed that the purpose of the maneuvers is to test the combat readiness of the armed forces of the country in terms of external threats.