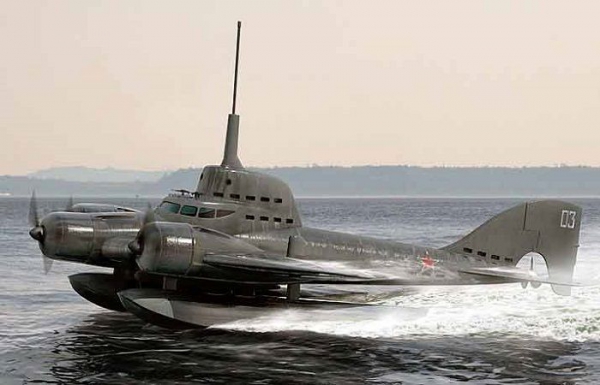 World war II in the early 1940-ies was inevitable. Large States was preparing for its start more than carefully. And if the III Reich was limited to the production of armored vehicles in the form of new tanks, the Soviet Union decided to design and develop brand new systems of arms.

The project is a flying submarine military Soviet designers started to develop in 1934. It was then a military engineer Boris Ushakov presented the pilot project drawings of a flying submarine (LPL). Development interested management team of the red Army and received seed funding.

The idea of fighting machines was simple. Submarine air gets to the approximate point of attack. Further, the seaplane with 3 engines sits on the water and begins a planned dive. The cockpit is thus flooded, and the crew will enter a special cabin in the middle of the body. The “underwater plane,” it was planned to equip the deep-sea periscope, but from the weapons on Board the “flying submarine” was supposed 2 torpedoes, which are mounted under the wings.

Speed combat vehicle were minor, but according to the designers, this was not required. As “submarine” could sink long before visual detection of enemy ships.

Overall, the project was more than adequate, however, with the beginning of World war II the General staff of the red army considered inappropriate allocation of further funds to develop the plane-submarine. All work on this project was discontinued in the fall of 1939.

Noteworthy is the fact that there is more to this idea of weapons no country came back. “The plane-submarine” has become truly a “dead end” of the development of world weapons.