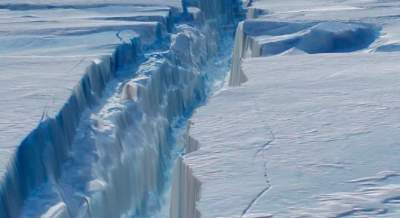 Five Antarctic expeditions and unknown to mankind beings. Ukrainian polar biologist Andrei Utevsky for 15 years immersed in the icy waters to explore the flora and fauna and to make unique images.

AquaLung Glacia are special machines that can operate in supercooled water. They are not frosted over and covered with ice.

The man was diving with equipment to a depth of 60 meters. In ice water at the South pole. On account of his 186 dives.

Andrei Utevsky is one of the most experienced polar scientists. About Antarctica dreamed of since childhood. And for the first time the icy continent visited in 15 years. Since then, he has become a permanent member of the team of the Vernadsky station. The expedition will depart every two years.

The leopard seal is one of the safest predators in the marine waters. He nearly attacked a group of scientists during one of the dives. Escaped, and Andrew still managed to take a photo, which is now most proud.

See also: Scientists have warned about the approaching global catastrophe

“My partner worked under the water, and he swam, we began to wonder. This is a dangerous circumstance. He can bite through a wetsuit and respiratory devices, cold water can get”,
– said the scientist.