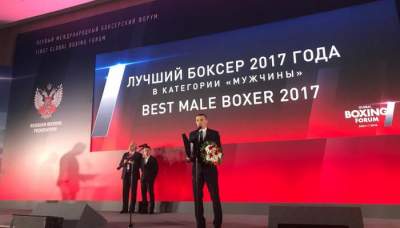 Khyzhnyak won the special prize at the world Boxing forum in Sochi, where the present leadership of AIBA, the presidents of all the Boxing organizations, leading athletes and officials.

The Khizhnyak managed to collect an incredible collection of trophies – Ukrainian became the champion of Ukraine in age categories U-22 won the adult championship of Ukraine, the European championship U-22, adult European Championships and the world Cup. In addition, Alexander was recognized as the best boxer of the world championship in Hamburg, and entered the Ukrainian book of records as the athlete who won largest number of titles for 330 days.

“This is an incredible recognition and a very honourable reward for me. Grateful to the international Boxing community, FBU President Vladimir Prodivus, first Vice-President of the FBI Dmitri Shantseva, my father and coach Alexander Khizhnyak, coaching the national team of Ukraine headed by Dmytro Sosnovskiy and, of course, to all the fans for their support. This is our joint victory.

Such rewards are a great incentive for even more motivation to work towards obtaining new heights. My main goal is the award of the Olympic games and will do their best to help you better prepare for the license world championship 2019 and to pass to the Olympics in Tokyo 2020″, – quotes the words of Khizhnyak official site of Federation of Boxing of Ukraine.

Alexander Khizhnyak not committed to the professional ring and plans to stay in the Amateurs for at least one Olympic cycle.