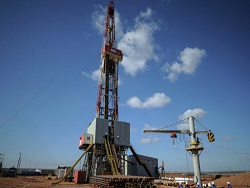 The authorities of Ukraine to simplify the procedure for obtaining licenses for drilling oil and gas wells, as well as the process of land allocation for the production of hydrocarbons. According to the report on the website of the Verkhovna Rada, the law was signed by President Petro Poroshenko.

As a result, the country will accelerate the process of obtaining land to conduct oil and hazerswoude, as well as for the construction of mining and transport infrastructure. This will allow oil and gas companies to reduce the cost of the work, and also at a faster pace than now, to increase production of hydrocarbons.

“Naftogaz of Ukraine”, commenting on the page in Facebook the signing of this law, indicated that it is primarily interested in increasing production of natural gas: “the Expected effect – plus one billion cubic meters of gas annually.”

The new law allows a different angle to look at the recent statement of the head of the Ukrainian government Volodymyr Groisman. He said in particular that in 2020, Ukraine will become an exporter of natural gas.

“We need to stop importing gas. We focused on the program of increasing the production of Ukrainian gas. The company last year increased its production to 700 million cubic meters”, — quotes the Prime Minister the edition “Ukrainian truth”.

Another conversation that neither of which the exports in 2020 of speech can not go. But the fact remains that Ukraine has decided to seriously tackle the development of its gas production. And here I am doing it for a long time, says Director of energy programs of the Center for world economy and international relations of the NAS of Ukraine Valentyn Zemlyansky.

Zemlyansky said that in order to understand how much gas Ukraine can get, the need to systematically conduct exploratory drilling: “we Need to understand whether this gas can it produce, and how much it costs. Here are the things you must do.” Well, now they are being made.