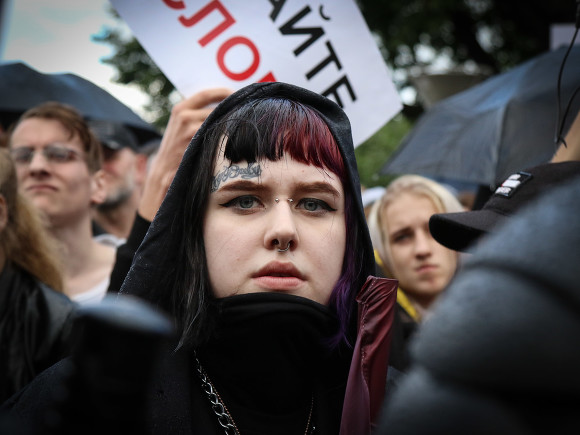 Participation in the protest rally Dude, all rappers, calls Artemiy Panarin, in fact it is very important. To some extent it is even a breakthrough. The fact that the backbone of the famous speakers of the Marsh were representatives of the older generation from Dmitry Bykov and Tatyana Lazareva to Artemy Troitsky. The same youth idols were quite cautious, preferring, or not to be complicit in supporting the regime or openly supporting it.

It is clear, given the trend to conformity. Relatively speaking, “Leaders of Russia” is better than the opposition, promising and fashionable. Accordingly, the youth tried to settle down. Yes, in principle it was all arranged. At least it was possible in the fat years to get or more often to settle down. Thought about a career in Gazprom or Sberbank, credit car, removable, and sometimes mortgage apartment. The situation did quite a decent life of the inhabitant.

But then things have broken and changed. First, the economy, of course. Secondly, a career in “Gazprom” it is good, but Patrushev and Fradkov also have children. By the way, exactly hence the interest of young people to the investigations of the Bulk. This interest is largely purely selfish. Thirdly, they see a huge gap of power from themselves. Well, that is, they cannot provide the power that does not know how often to turn on the computer and regulate the Internet offers with a switch. This is, by and large, generally two different civilizations — past and future. This collision happened now, therefore, the crisis brought the issue of political representation, or rather, its lack.

It is impossible to say — Dude called youth, because he wants to or because it wants the young people. But it doesn’t matter because I’ve got a counter-movement. Can’t stop it and it becomes mainstream, and idol it can no longer be ignored. The yesterday heroes can, of course, for goodread to go to the festival with meat or jam, but they also have to realize they need to earn a pension, the more the chance will not. Those who retired earlier are understood to fit into the mainstream. And this, incidentally, applies not only to famous people, but also unknown.

In the end, it is obvious that the current government in all its floors — is yesterday. Maybe there is a separate modern people, but the system ensures that they will act as a modern. Risk for the same Dude global no no. For young people who are dissatisfied with the power situation in the country and other things, too. Anyway, her generation will get the power, then the government and society at least will talk the same language. That’s why they do not come out of the Bulk, or Sable, they surrendered to them, and for myself.