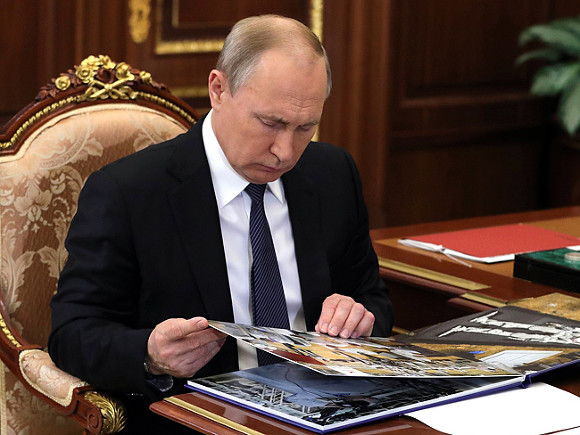 Russia — the country of implemented utopias. The construction of another began immediately after the collapse of the previous, Soviet. And here it rises in all its glory.

Moscow unrest, Siberian disasters, streams of messages about what the higher orders, which will force the economy to growth, and loyal subjects to contentment, sinking in the quagmire, — all this gives the celebration of the twentieth anniversary of Vladimir Putin some minor shade. But in reality, it just indicates that the goal to which, consciously or instinctively so long and went hard mode is almost reached. To the extent, of course, which is obviously utopian tasks generally can be performed.

It’s amazing. Humanity, it seems, did not even realize what a Grand, nothing on a similar project carried out in our country.

Name one great power, where the election of any of the many thousands of local deputies required the go-ahead from the Supreme power. Where future “elected” heads of regions and provinces, must first acquire the NCO skills in a specially organized for them island. Where representative institutions — the factory restrictions. Where the options for the construction of the Park is several thousand kilometers from the capital is carried to the head of state.

“Utopia is something fantastic, unattainable, an impossible dream”, — explained in “Wikipedia”. And it turns out is fundamentally wrong. In our state at the behest of the authorities and with the support of the people repeatedly carried out a variety of utopia, i.e. trying to build an earthly Paradise. All these initiatives eventually failed, but not immediately. Utopia tsarist spending the time now will not, but last Soviet, many still in the memory.

Its core was the creation of a super powerful country on the detailed plan drawn by the authorities, despite the total ban on any market relations and violence with their carriers.

Of course, the literal fulfillment of this idea, life would be stopped. But every taboo you could walk around, observing the special rituals and, of course, assuming the risk. Business chiefs used to buy and sell material assets, sharing if not with money, services and “funds”. The common people were fed different crafts, paying the verifier of legal and illegal bribes.

All this is well known. From today we need to see more. That at some stage of its existence, the Soviet system is sufficiently stiff to exclude any evolution. Everything looked like a step back from utopia, her eyes became unthinkable. For example, to legalize small and medium private sector was in the interests of the country and, abstractly speaking, in the interest of maintaining the regime. But it is absolutely impossible to imagine under Brezhnev an official restoration of capitalism in some sectors of the economy or, for example, in a particular town. For items it would mean to renounce yourself. By the way, the corruption such a renunciation was not, as it was considered illegal and it is usually overlooked.

The Soviet utopia went too far and could not smoothly be demobilized. So, having gone through a phase of stagnation and decay, she was in the end just crash. That’s what happened.

Greatly simplified, those who now explains the refusal of the authorities to take back the capital protests but fear “show weakness”. For the authorities to retreat, would be to renounce ourselves, to dismantle its newly built utopia. And it just now came to the point where evolution for her would be impossible.

Here’s how the work depicts the vertical one ironically minded observer: “the Tale of little red riding hood in modern Russia. In the statement of the Investigative Committee: “In the Komi Republic was found the body of 15-year-old girl who died after being attacked by a wolf. Specifies that the SK region is brought criminal case about negligence. The investigation will be assessed the activities of local governments in maintaining the security of local residents and officials of the Ministry of natural resources and environmental protection of the Komi Republic. They do regulate the number of wolves in the region.“ Interestingly, no one was interested in the identity of the wolf. Probably because it, unlike the Forester, still have to catch it”.

While the unfortunate event did not occur, no risks do not matter. But when it took place, a whole crowd of officials immediately enters the network control enforcement will have to prove their innocence and innocence, regardless of whether they are obvious or not. For its part, countless supervisors and conservatives are always right and never responsible for any problems and troubles. The recent history of floods and fires — about the same.

The core of the current Russian utopia, which with some exaggeration can be called the Putin, is the tendency to prescribe from the top is absolutely everything and everyone. To implement this task is created which has no analogues in Russian and world history machine audits, inspection, control and sanctions, called for brevity the chain of command.

We will not diminish the uniqueness of this system. In African countries having a strong and active opposition parties — a common occurrence. In mazurovskoe Venezuela several governors of key States — opponents of the regime. Almost complete (and maybe even full?) unacceptable for our higher power unauthorized citizens elect someone it is not certified even on the most modest position says about the amazing radicalism newest of our utopias.

Yes, unlike its Soviet predecessor, it does not prohibit market relations. But only if they are agreed at the top and a full follow-up control state machine (“transparency”). Current middling capitalist tycoon feels much less free than the Soviet average CEO of any scientific production Association. The CEO, of course, in their management decisions floundered in the General stagnation, but at least a little afraid of who. But the tycoon also strengthens the economic stagnation, however, every reason to live in fear. At any moment anything pull. Or for anything.

In fear, we will add, lives and civil officials and people’s choice, and big boss from the authorities. The enemy is everywhere. For yourself, you can organize a lot of benefits — much more than in the Soviet Union — but unable to punish anything. Or, again, for anything. Utopian vertical does not guarantee anything to your links.

When its construction began? No, not “Putin” August 1999. The desire to centralize, albeit in more moderate form, emerged in the early ’90s and in’ 98, after the default has become an obsession like the item so much.

Is it possible to call win this utopian concept of ideological and institutional triumph of the secret services? This is something there, but not all. At the turn of XX and XXI centuries the belief in zentralisiert has become universal.

I remember a conversation with a progressive financial expert. It was in the beginning of 2000, Putin has rules, but has not yet been President. This polite professional, in the future, Deputy Prime Minister, has set out guidelines for the upcoming budget reform. Her task was to select the revenue sources of the regions and pass them to the center. He reminded that the money stolen, and the Federal government, he thought, spend it for the benefit of society. That second assumption is wrong, and a planned deficit of local budgets will make the regions and LSG puppets of the centre, he had no idea. And I do too.

Say it was a long time ago. But today, for example, the Ministry of Finance is perceived as one of the most advanced of our offices, permanent struggles with informal (i.e., outside the control of government) employment that involves tens of millions of people. Public damage from the defeat of a significant part of it is in no way kompensiruet tax winnings. Monoideja control covered, if not the whole thing, it really is clearly the dominant part of the power machine. The secret services and the supervisors expresses it, only the more simple and straightforward than others.

Vladimir Putin rightly embodies this utopian system, because it has always shared its principles and was the head of the state, if not in all phases of its construction, the bold. Centralize dream come true would be without him, but are unlikely to have come this far. It remains only to verify, critically far or not. In fact, besides almost driving myself to perfection of the power machine is also the people. And his faithfulness utopia is not so obvious as it was twenty years ago.