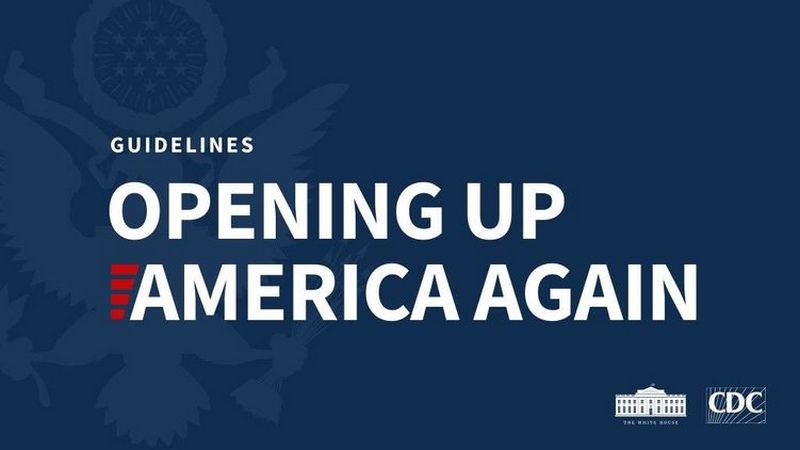 Trump has converted his campaign slogan because of the coronavirus.

The US President Donald trump, as promised, unveiled its plan to lift restrictions caused by the epidemic of the coronavirus Covid-19. A document entitled “Opening Up America Again” (Again open America) published on the official website of the White house, reports the Chronicle.info with reference to Country.

The plan was developed by trump administration, with the participation of medical experts and announced at the briefing in the White house.

Moreover, as stated by the President, the governors of those States where the situation with coronavirus Covid-19 is safe, you can begin a phased resumption of economic activities, starting today, April 17.

The proposed head of the White house plan for a return to normal life in the United States is divided into three phases.

In the first phase it is proposed to maintain strict measures of social distancing, especially for vulnerable populations. In public places you need to be from each other at the greatest possible distance, do not come to companies of more than ten people, and to refrain from trips that are not necessary. At this stage, the educational institutions will remain closed. Also maintained a ban on visits to the elderly.

In the second phase included the opening of educational institutions, to gather you in groups up to 50 people, allowed an optional trip. The remaining steps will remain the same. The elderly at this stage it will be possible to visit by special permission.

The third stage involves lifting the restrictions for vulnerable groups of people subject to their compliance with social distancing. To resume work will be available to all companies.

Expert immunologist and a consultant to the White house Anthony Fauci, in turn, added that the plan provides for the fourth phase, but it primarily implies the existence of an effective vaccine against Covid-19. However, he noted that austerity measures imposed by the US administration have borne fruit, and expressed the hope that the country passes through stages that have been announced.

Speaking to reporters, trump mentioned the resumption of sports competitions in the United States. The President explained that at first they will be carried out in an empty stadium, then to the stadiums will start up a limited number of viewers, and finally after the complete elimination of the threat of coronavirus stadiums again filled.

“Many of the first sporting events will be held exclusively for broadcast on television,” said trump.

Later, he told the President, on the podium will start to allow fans, but so that, for example, setting “has been separated between two empty places.”

“And finally, when the virus has gone, we will have filled the stadiums,” said trump, and added that a similar phase diagram will apply when you resume restaurants.