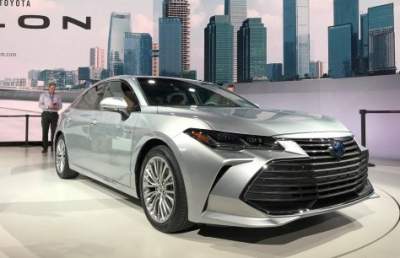 There will also be a hybrid variant with capacity to 209 HP.

The premiere version of its flagship sedan Toyota Avalon will be held at the motor show in Guangzhou.

At the upcoming event will show the modification of Avalon, destined for the Chinese market. From the North American congener, the car will feature redesigned headlights and a slightly different grille.

In addition, there will be other motor options. This is a gasoline engine of 2.5 liters capacity of 178 horsepower. He borrowed from the Chinese versions of the Toyota Camry.

In the US Toyota Avalon sample of 2019 began selling in April this year. The car uses the platform TNGA, which drive other members of the Toyota – Prius and Camry.

In North America the car will be offered in several versions. Therefore, the cost varies from 35 500 to 42 $ 800 depending on configuration.