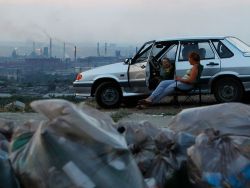 Economic growth in Russia in 2017, contributed to the high oil prices and large government spending and its related corporations on major projects like the construction of the Kerch bridge. While the economy remains in a structural crisis, and the rise is uneven. This means that next year the growth may not be at all. To such conclusion experts of FBK economic club.

New year’s summing up, experts have begun on a positive note. The Director of the Institute of strategic analysis FBK Igor Nikolaev immediately rushed to share all the good news.

In particular, according to his calculations, at the end of 2017, inflation will be around 2.5%, the dollar will end December at the level of 60 rubles, and economic growth will be 1.5 to 2%. However, this optimism was over.

“If we have such low inflation, why there is no inflow of investments? — asks the expert. — We don’t get the indicators, which would like”. According to Rosstat, the growth of investment in fixed capital in the first nine months of this year reached 4.2%.

In this case, “the stability of the ruble” was achieved due to the inflow of funds operations carry trade, says Nikolaev. By estimations of participants of the market, the share of non-market Federal loan bonds (OFZ) exceeds 30%.

Real disposable incomes of Russians are falling for the fourth consecutive year, economic growth is unsustainable and next year will generally be almost zero, grieve the expert. According to Rosstat, in October, revenues fell by 1.3% compared to the same month in 2016.

In addition, this year is almost completely exhausted the Reserve Fund, adds Nikolaev. So, on December 1, the Fund was only 992 billion rubles. In the remaining three weeks of 2017, the government plans to spend these funds, announced recently by Finance Minister Anton Siluanov. In General, in comparison with February of 2015, when the Fund has printed, to close the hole in the Federal budget, its size has decreased by almost six times, or 4.9 trillion rubles.

Other experts agree with Nikolayev. According to the former Deputy Minister of economic development Alexey Vedev, economic growth, and this year’s “almost invisible”. Retail turnover grew by only 0.5%, paid services by 0.2%.

“This is purely a corrective growth. This year growth will be high at 1.5-1.6 percent, and next year is about zero,” he agrees.

“Economic growth itself is not. Well, that was not a recession,” added the former Chairman of the Central Bank, Professor at the Higher school of Economics Oleg Vyugin. Thus, according to him, the main reason being that in terms of public and quasi-public economy, no one has “motivation” to the development.

In turn, the Director of the Economic policy program of the Carnegie Moscow center Andrei Movchan believes that the main sources of economic growth this year — growth of prices for the Urals oil at 20% (according to him, this is equivalent to GDP growth of around 2%) and public investment in infrastructure projects (construction of a bridge across the Kerch Strait, the program of renovation of housing and the project “Power of Siberia”). But at any moment it could end, he adds.

The growth in Russian salaries is happening only in the state and around state companies, criticizing Andrei Movchan, the positive rhetoric of the officials. We will remind that recently the head of the government Dmitry Medvedev said that nominal wages this year, rising 7%.

“Where’s the wage growth? Not everywhere. Is the imbalance between the growth of wages in the public and quasi-public companies and private companies where it does not occur”, — said the expert.

Movchan also am concerned about the failure of arms exports. In particular, if at the end of last year, the volume amounted to about $15 billion, by the end of 2017 it will drop to $5 billion a feeling that in 2018, it “generally may not be,” says Movchan. The fall of the export of weapons is due to the large number of imported components in the production of weapons, which ceased to deliver to Russia, he explains.

However, President Vladimir Putin on 7 November at the meeting of the Commission on military-technical cooperation of Russia with foreign States said that, in the first three quarters of the current year the portfolio of orders for military technology cooperation exceeded $45 billion “plan export in 2017 should be $ 15.3 billion,” — said Putin.

Among the record of 2017 adviser of Institute of modern development Nikita Maslennikov highlighted the fact that the replacement rate on the pension savings fell from 35% to 30%. In addition, not solved either the problem of tax reform, nor with the system of individual pension capital in particular, it is unclear when and in what form it will work.

“We have an extreme degree of demotivation” — he describes the situation.

According to him, now in Russia “the classical structural crisis”. If this year the Russian economy can show that even “unstable in all directions”, but still economic growth, then next year it might not even be, say the experts.