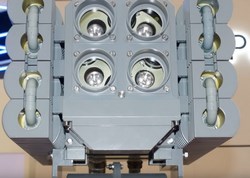 Posted a video of the test station visual optical interference 5P-42 “owl”, which take place at the St. Petersburg plant of the holding company Ruselectronics.

On the ship included something like a powerful searchlight, the light from which you can easily go blind. The head of Department scientifically-technical support of projects of the company-developer Vladimir Zharov said that many of the volunteers admitted that before eyes there is a spot, which causes almost hallucinogenic effect.

“All reported dizziness, nausea and loss of spatial orientation”, – he added.

At the same fatal consequences for the eyesight not what distinguishes the invention from the Russian foreign analogues.