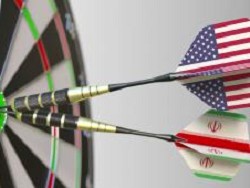 The United States believe that depriving Iran of the ability to export oil, will not cause turmoil on world markets. This statement was made by the representative of the state Department.

According to him, Washington is working hard with other countries to persuade them to abandon Iranian oil.

“Iran uses derived from the sale of oil revenues to Finance terrorism. We are determined to resume against Iran sanctions” – quoted the representative of the Department of state TASS.

The diplomat noted that the United States will propose to the countries that buy oil from Iran and alternative sources.

“We are confident that you will be able to do this without causing turmoil on world markets <…> to ensure the flow on the oil market in the required amount, we intend to cooperate with Saudi Arabia and other countries-oil producers,” added the representative of the state Department.

According to Secretary of state Mike Pompeo, the purchase of oil from Iran will be regarded as violation of us sanctions.

On may 8 the President of the United States Donald trump announced the US withdrawal from the nuclear agreement signed between Iran and the countries-intermediaries in 2015. According to the agreement, Iran has removed UN sanctions, the EU and the United States in exchange for ending its nuclear program.