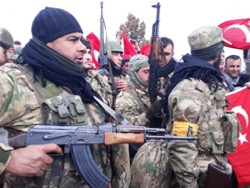 Turkey is increasing its military presence in the North-West of Syria, citing the need to fight against “Kurdish separatists.” Despite statements by Ankara that it operates with the consent of Russia and the United States, the tension between the countries is growing.

The military operation “Olive branch”, which is being carried out jointly by the armed forces of Turkey and Ankara support the “Free Syrian army” continues for the sixth day.

During this time, in accordance with the calculations set in London of the Syrian monitoring centre for human rights (SOHR), victims are already more than 130 people. The number of dead has increased rapidly in military action on both sides involved to 20 thousand people. Because of the humanitarian situation: currently in Afrin, home to at least 800 thousand civilians and among them many who came to this province, fleeing the fighting in other parts of Syria. Including, for example, in Idlib, where he now leads a massive offensive, the Syrian army and its supporting militias.

Turkish Prime Minister Benali Yildirim before the “Olive branch” has declared that its ultimate goal is the creation of 30-kilometer zone along the Syrian-Turkish border, which will be under the control of Ankara. At the same time, Turkish President Recep Tayyip Erdogan said that the military can move up to Manuja — largest city, which is under the control of the “Democratic forces of Syria” (it is a military Alliance that openly supported the United States, it includes Kurdish defense forces).

If the military operation will really be at the time, it can be fraught with even direct conflict between Turkey and the United States. Of course, Ankara is not going, although it was the American President Donald trump called on his Turkish counterpart to “de-escalation and limitation of war.”

In Turkey, meanwhile, is growing dissatisfaction with the military operation: according to an international human rights organization “reporters without borders”, as a result of police raids in Istanbul and Diyarbakir were arrested several journalists and active bloggers who opposed intervention in Syria.

“Reporters without borders” found that personally the Prime Minister of Turkey Benali Yildirim, met with chief editors of major publications and instructed them how to write about the “Olive branch”. Of course, only in a Patriotic vein, without a shadow of doubt and condemnation.

And in Nicosia, the capital of the breakaway state of Northern Cyprus (the UN considers it occupied by Turkey) protesters on January 22 defeated the newspaper “Afrika Gazetesi”. The anger of the protesters caused a newspaper article in which the operation “Olive branch” compared with the occupation of Northern Cyprus in 1974. The title of this article drew attention to Erdogan, it seems that his strong rebuke and served as a “trigger” of the militant patriots to attack the independent newspaper.

In fairness, most Western publications, describing a demilitarized “security zone”, which appeared in the North of Syria after the Turkish military operation “shield of the Euphrates”… and so use the word “occupation”.

The situation in Syria, the “Free press” asked to comment on our lead analyst on the Middle East expert of the national strategy Institute and editor-in-chief of the scientific journal “the Muslim world” Raisa Suleymanova.

“SP”: — Rais Ravkatovich you agree with the assessment that give the Turkish action Western publications — “occupation”, “intervention”?

In my opinion, in this case, the West has correctly described what is happening in the North of Syria. Syria increasingly resembles post-war Germany, the USSR took East Prussia (Kaliningrad oblast), Poland — part of the German territories, France is also a part, well and the country was eventually divided into the FRG and the GDR.

“SP”: — what part of Syria claim in this case Turkey?

Turkey in Syria pursues specific interest — to prevent the creation of a Kurdish autonomy, with the prospect of its accession to Iraqi Kurdistan, declared in a referendum in September 2017 sovereignty (not only in Northern Iraq but also in all areas of compact residence of Kurds in the Middle East).

Given that it is unclear what will happen with post-war Syria as a single state, it is likely that Syria could turn into a Federation with broad autonomy in some areas, primarily the Northern Kurdish. This option is clearly not satisfied with Ankara, where she is trying in advance to prevent the development of such a scenario.

Probably Turkey considers this the best option for themselves: the free Syrian army (FSA) will control the North of Syria under the patronage of Turkey.

“SP”: — And how Turkey plans here imposing their own rules? Exclusively military? But, as the experience of the Middle East, long “bayonets” no regime lasts.

— Because Ankara does not recognize the government of Bashar al-Assad as the legitimate (consider it as such of the participants of the war in this country, only Russia and Iran), it is quite possible that the FSA will be from the Turks created a puppet government, which will control that part of Syria which is strategically important for Ankara: in the first place, the Kurdish territory.

Probably the future of Syria, where war has lasted for a time longer than even the Second world war, is seen in Turkey, by analogy with postwar Germany, when its territory was divided into the FRG and the GDR. Accordingly, Ankara is beneficial to part of the territory controlled dependent on it the government that will be formed from the leadership of SSA.

“SP”: — Why Russia is not opposed to the actions of Turkey?

— It’s hard to judge how Russia was so opposed to the actions of Turkey. Please note: the Kurds have accused Moscow that the withdrawal of the Russian troops has led to the fact that Turkey, seeing this, grew bolder and began the invasion on Afrin. Moreover, Ankara is not going to stop and plans to continue to take Manbij.

Some counteractions from the Russian side in relation to the military operations of Turkey and the FSA, we do not see and, most likely, will not see: now Russian-Turkish relations are not in a state of “cold war”, as it was at the end of 2015 and the first half of 2016, and, on the contrary, both countries strongly demonstrate willingness to cooperate.

Therefore, most likely, we will see just another “expression of concern” by the foreign Minister Sergei Lavrov — but all. I do not exclude that, maybe, we are witnessing the implementation of a plan for the postwar partition of the territory of Syria where the border with Turkey and inhabited by Kurds are given control of Ankara and dependent FSA for the establishment there of a puppet buffer state.