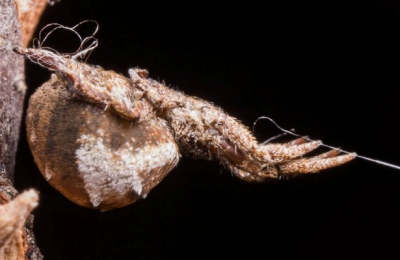 In this position, the spiders can stay for hours.

A new study revealed that spiders are able to transform your web in a “slingshot” and eject in the direction of their prey.

Usually spiders hunt, placing their networks from the web, but one of the species found web new use. Spider species Hyptiotes cavatus from the family of spiders-elaborado originally from the US and Canada.

To observe the spiders in their natural habitat, scientists at the University of Akron (USA) used a special high-speed camera. The survey showed that spiders pull the threads of his web on the principle of a slingshot or sling, using his body as a projectile.

In this position, the spiders can stay for hours, but once the victim hits the web, the spider releases the thread and using the stored energy of the web at high speed “shoots” in the direction of extraction, and then entangles her from all sides, depriving of any chance at salvation.

According to experts, this is the only known example of the use of the web to increase the speed of a spider. Such use has spider Hyptiotes cavatus on a par with with other types who seek to enhance muscle energy with external devices.