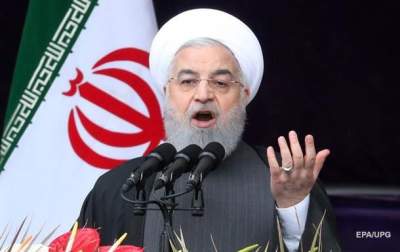 Hassan Rouhani responded to the message of Donald trump on Twitter in which he criticized the current government in Iran.

Iran’s President Hassan Rouhani called the President of the United States Donald trump’s “the idiot”. He said this in Central Tehran to Freedom square during the celebration of the 40th anniversary of the Islamic revolution.

Rouhani promised that his country will not abandon missile programme and promised that the “enemy” conspiracies against Iran will fail.

Rouhani’s statement was a response to the message of Donald trump on Twitter in Persian language (Farsi) in which he criticized the current government in Iran.

“40 years of corruption. 40 years of repression. 40 years of terror. The Iranian regime has created only “40 years of failure”. The long-suffering Iranian people deserve a much better future,” wrote trump on the occasion of the 40th anniversary of the Islamic revolution.

On the eve of Iran held a festive event dedicated to the events of 11 February 1979. In Tehran staged a massive procession, which authorities called “a million”.

According to Western media, and was attended by hundreds of thousands of people. Traditionally, the demonstrators chanted anti-American and anti-Israel slogans, burned flags of countries and an effigy of Donald trump.

Earlier, Iran’s spiritual leader Ayatollah Ali Khamenei wished the death of Donald Trump, Vice-President John Bolton and the head of the state Department Mike Pompeo. However, he assured that he has nothing against the American people.