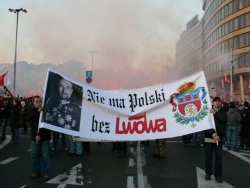 As soon as Ukraine will weaken economically and politically, Poland will prepare the legal grounds to pick up once owned land that is currently part of Ukraine.

About this on air of the program “Right to vote,” said ex-Deputy of the Verkhovna Rada Spiridon Kilinkarov, reports the correspondent of “Politnavigator”.

“In my opinion, the poles approaches it in a very rational way, trying to convert historical past, that now dominates in Ukraine. They are trying to translate past events into concrete, real things.

During the “Maidan” in Ukraine they actively supported the entire ideology of the protesters, including Bandera. At that time it suited them. After a year arrived in Poland Mr. trump and spoke with the top leadership of the country. And suddenly after a week Mr. Kaczynski speaks with a harsh statement about Bandera that Poland is no longer going to tolerate the glorification of nationalists”, − said Spyridon Kilinkarov.

Also, the ex-MP told what the plans for the near future Poland has developed with regards to the alienation of the Ukrainian lands.

“The poles are very hard lobbying for their own interests: first, they adopted a joint resolution to calm the Ukraine, then they passed a law criminalizing the denial of the crimes of Bandera. The next step will be the recognition of the genocide of the Ukrainians of the Polish population, followed by a financial claim, after which territorial claims to Ukraine.

As soon as Ukraine will weaken politically and economically, they will take advantage at any time, no wonder they are now preparing the legislative framework and public opinion poles to take part of the Ukrainian territory”, − said the former Ukrainian Deputy.