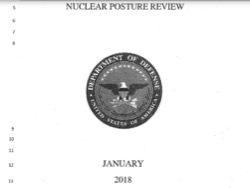 “Russia is not the Soviet Union and the cold war is long gone. However, despite all our efforts to maintain good relations, Russia perceives the US and NATO as major rivals to implement their destabilizing geopolitical goals in Eurasia” – quote from the report “Nuclear Posture Review”.

The report “nuclear posture Review” was made in the Pentagon and published in early January 2018, the document determines the future of U.S. policy in the nuclear field, the number and the concept of the construction of the nuclear forces of the country for several years ahead.
According to the text of the project, the administration of President Donald trump wants to significantly increase the number of nuclear warheads of low power, in order to strengthen nuclear deterrence of China, Russia, North Korea and Iran.

In the new US nuclear strategy stated that “Russia is developing at least 2 systems of Intercontinental range hypersonic glider and a new Intercontinental Autonomous nuclear torpedo”. We are talking about the Russian submarine drone “Status-6”.

Reference:
Part of the system “Status-6” is an unmanned underwater robot, which is a giant deep-sea high-speed torpedo with a nuclear warhead.
The range of its actions 9977 km, a maximum speed of 56 knots (compared to the speed of the us attack submarine of the Seawolf type up to 35 knots), depth — almost a kilometer.

Test project “Status-6” took place in January 2016 and ended quite well, but then the Pentagon did not respond to the “Russian secret weapon”, which blew many foreign media. Apparently they were waiting for something, because only two years later, the Pentagon nevertheless admitted the Russian weapons on the basis of this information, issued a report “Nuclear Posture Review”.

The basic idea of the strategy: In the event of a threat of defeat in the course of non-nuclear conflict, Russia can use nuclear weapons, this is unacceptable and the U.S. should oppose Russia.
Solution: to Keep her”under threat: only that in the Kremlin know about it”.

The official status of the document will become only at the end of January when Donald trump will turn to Congress with the annual message “About country position”. And now supposedly accidental draining of the report to the network says only one thing, the US has consistently failed to move in the post world leader.