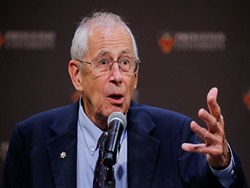 The winner of the Nobel prize in physics 2019 James Peebles (James Peebles) has criticized the Big Bang theory the event, hosted in honor of Nobel laureates at the Swedish Embassy in Washington (USA). About it reported in a press release on Phys.org.

The processes taking place after what is called the “Big Bang”, left cosmological signatures, called fossils is presented (eng. fossils) by analogy with the ancient fossils. According to him, scientists can determine the conditions that existed in the early Universe. However, the birth of the Universe to the stage of its regular extension is described by theories that can’t yet be tested, for example, the inflationary model of expansion. At the same time, Peebles admits that the phrase “Big Bang theory” is already firmly established in scientific use, so he uses it.