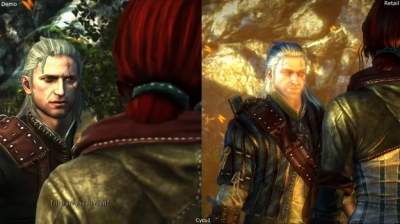 Sometimes it happens so that on release the game is even better than it looked on the presentation.

Games E3 is the biggest gaming event where developers often greatly overstate the early versions of their games on release frustrate gamers. But sometimes it happens so that on release the game is even better than it looked on the presentation. One such project is “the Witcher 2” from the developers CD Projekt RED.

In addition, the surroundings in the final version also looks more detailed and with better textures than the demo from E3. For example, the same rocks turned out much better. Aggressive DoF bokeh effect was slightly reduced after the demonstration at E3. As a result, this led to an improvement in the overall image. However, grass, weapons, and many of the characters (Jorvet and his accompanying elves) look almost identical.

Company CD Projekt RED one still was criticized for downgrading the graphics in the game “the Witcher 3”. Then the Studio admitted that it changed the image quality is only due to the fact that the console couldn’t afford the bar, which exhibited developers.