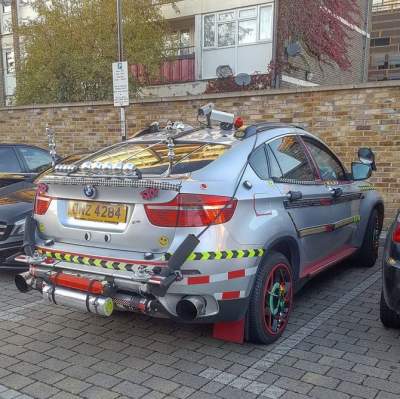 The owner decided to stand out in the crowd.

If we go back ten years ago, it is easy to remember, which has revolutionized BMW X6. This crossover has long attracted attention, and urban onlookers always turned around after the unusual and the new car.

The reverse side of this vivid image is popular. When the streets had filled the car, and the competitors had already prepared their own versions, it became somehow boring. The most resourceful motorists still found a way to cheer up the public. View the BMW X6 is one of such originals.

If we look at this photo, it would be nice to understand. In addition to emoticons, “eye”, fancy wheels, and some brilliant things can be noted that the man seriously cares about security. Note camera, stickers with reflective elements and additional exterior mirrors.

Perhaps the owner just did not have time to remove his costume, prepared for a car for Halloween, and continues to “scare” the passers-by and neighbors on traffic.