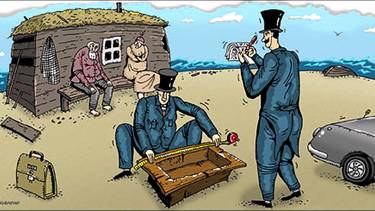 What’s 13-15 trillion. roubles “shadow” income/expense of the Russian population? The scale of this sum is comparable with the expenditure side of the Federal budget of the Russian Federation in 2019, constituting just over 18 trillion. rubles, accounting for over three quarters of it. At the same time, and it’s much more revealing, 13-15 trillion. roubles “shadow” incomes of the Russian population is exactly half of the official total of the wages Fund in Russia, which paid the tax to incomes of physical persons. At the end of 2018 received 12,392 trillion. RUB revenues of the consolidated budget of Russian regions, of which 29.5% of the entire amount constituted income from personal income tax. Therefore, the total wage Fund in Russia for all 2018, which is in consolidated regional budgets personal income tax was paid, amounted to approx. 28,12 trillion. rubles, from which 13-15 trillion. make up exactly half.

Judging by the totality of the available data, it is highly likely that more than four-fifths of all deposits were held by no more than 5-6% of the Russian population (approx. 10 million people). But this group of the population of the Russian Federation, as a rule, does not use their deposits in banks as source of financing of their current expenditures for these purposes, it is enough they receive current income.

As stated that is the extent of the total amount of Bank deposits may not be counted more than 5.8 trillion. rubles as the additional “pent shed” over the consumer market of the Russian Federation. But this “pent shed” is concentrated in the hands of 3-5 million families (8 – 10 years to 15 million, maximum).

At the same time, approximately 35-43% of families (households) of the Russian Federation keeps savings available at home. According to various sociological surveys and expert estimations the average size of these savings ranges from 35 to 45 thousand rubles, “the circle” gives no more than $ 1 trillion. rubles, “backup” means.

Thus, the maximum amount of the rights of the requirement of use-values, which in 2019 may be presented by the population of the Russian Federation for “merchandising” (including all fees) is not more than 49-50 trillion. rubles.

It’s still a miserable level, not even poverty, namely the level of poverty or very close to the fuzzy bordering on begging, based on the criteria of European and us statistics agencies, international financial and economic organizations.

Thus, to satisfy the maximum possible current demand of the Russian population, the total nominal volume of retail trade and paid services to the population not expected to grow by 1.7% in annual terms, as foreseen by the forecasts of the Government of the Russian Federation, and 18-19 percent on an annual basis!

Minus 4% (take the 4%, although we are the Government and the Central Bank is convinced that inflation for the year will be less) this is a 14-15% growth for the year, which has, though in a certain part of “deferred”, but in reality, the hopelessness of the “pending” demand of the Russian population on the goods and services of current consumption.

Such “real” terms the volume of retail trade and services to the population, even in China and India did not grow never in the past, at least half a century. It is obvious that the current Russian economy is its own “forces” will not be able to provide in the course of the year such an increase of goods and services in kind, and not in the “price terms” necessary to meet the already existing, though partly the “pending” demand of the Russian population on the goods and services of current consumption.

To meet this deferred demand required additional increase in imports of goods of current consumption of the population is not less than us $ 100 billion. USA!

And what is the total volume of Russian imports in 2019? In the first half it amounted to 117.3 billion U.S. dollars, therefore, for the whole year can be estimated at about 230-235 billion. USA. This means that to meet the current “pending” demand of the Russian population in 2019, the volume of imports had to be increased by half!

Balance of foreign trade of the Russian Federation by the end of 2019 will be approximately 175 billion. The U.S., of which 100 billion (almost three-fifths) must be additionally used for the purchase of import of goods for the current demand.

The government of this surplus of 175 billion dollars. USA at their disposal can get around 35, max $ 40 billion. USA. Even if all these funds on the provision of import of goods current demand of the population, where to get more 60-65 billion. USA? That is who “cannibalize” yourself (foreign exchange reserves), or oligarchs exporters, or partly of both of these?

However, neither one year nor two, nor three, nor five years, the issue is not solved – goods of current consumption will be consumed, and their production in Russia to increase significantly not the is, on the contrary – imports will continue to pressure domestic production. And imports will need to Fund each year.

Not only that, such “precedent satisfaction of pent-up demand of the population” if it happens now in Russia, would require in each subsequent year, at least, to increase total household income less than 6-7 trillion. rubles. Because of this “pass-it” will not be – it will be used by the population for current consumption in the first year, and what is the consequence for the Government a sharp (approximately 15% per year in real terms) reduction in the level of current consumption of the population?

Measures to promote domestic production and increase of level of wages in the Russian Federation today should should include not only investments in production, how much of a radical change, as a minimum minimorum, all the institutional conditions for the production and business climate in Russia. Without this no investment, no real growth of production volumes and total payroll, the source for which is not the state budget, and private funds, in Russia there is now, and will not in the near future, by definition. No spells, calls and, especially, threats to entrepreneurs these issues are not solvable in principle.

Therefore, if the Government of the Russian Federation such “precedent” (and suddenly), or prevent (no matter for what reason), it will have still at least three to five years due to budget extra to pay the approx. population of 100 billion. USA. Why at least 3-5 years? This is the minimum for the current Russian average investment cycle of production of goods and services for current consumption to the output of such production at full capacity. These 100 billion. The United States each year goes to the advantage of the 100 billion U.S. dollars annually, which in this unlikely event would have to go towards the purchase of the import goods for the current demand.

Where to get some of these $ 200 billion. The United States each year, and so five years, at least? To dispossess someone, “myself”, or oligarchs exporters, or both, of these? And how long is enough “reserves”? But for the Russian Government to substantially completely different – how long it will stay in their seats, if at least to give a hint about anything like this? And that, in this situation do the current Russian Government and the Central Bank of the Russian Federation?

“To hold and not let go” – otherwise acceptable to them and all of them are valid beneficiaries, there is no escape. Deferred the demand for the goods and services of current consumption in no event it is impossible to turn into actual demand it is inevitable to cause such a powerful surge of “inflation” that will bury all remnants of the economy of the Russian Federation and all the rulers of it. But for a long time to keep such a threat of transformation of “deferred” demand to actual demand no less fraught, because it means sitting on a powder keg with the fuse lit.

Therefore, all existing “overhang” should “absorb”, that is, to put it simply, to remove from the population, but so as to not cause mass protests. How to remove? Forcing people will spend all their accumulated “reserve” on current consumption.

How to do it? Three are obvious for macroeconomists (for financial accountants, in fact) tools: 1) Reducing the total income of the population under the guise of their increase. 2) Increasing fees from the population under the guise of caring about the satisfaction of his current needs. 3) “Targetarea inflation” so that formally she would have declined, but actually increased, but that population is the source of this growth was not obvious.

And all this is necessary to ensure and accompany does not stop even for a moment the propaganda campaign about planned and just about ready to happen breakthroughs in the economy of the Russian Federation with the purpose of steady growth of level and quality of life of the population, which, however, struggling to prevent the gate and the adversaries of all stripes and from abroad and from within.

The author deliberately not taken into account such sources of incomes as pensions of all types (this is the order of 7.0-7.5 trillion. RUB.), the social benefits of all kinds, income from property, etc., which gives a total order of 9.0-10.0 trillion. rubles.

But from the amount of income we must deduct all the fees and taxes paid by the population (only income tax will be at least 3.7 trillion. RUB, plus approx. the 1.3-1.5 trillion. property taxes and other fees that “the circle” yields not less than 5.0 trillion. RUB in the negative). Should also deduct interest on loans, and also payments in repayment of loans (this is approx. a 4.0-4.5 trillion. RUB. per year minus).

Thus, all these “details” or mutually offset, or add approx. 1.0 trillion. rubles to the total amount of demand for goods and services needed by the population for current consumption. The end result of all of the rough estimates given in the main text of the article, it does not change anything substantially, including changes nothing in the evaluation of the level of poverty in Russia. About four-fifths of the Russian population, if not more, by European, American and international standards or clearly belong to the poor or on the brink of poverty.