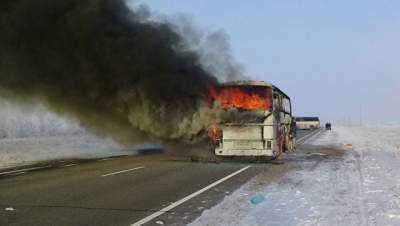 As a result of a fire in a bus killing 52 people.

Short circuit — one of the possible causes of the fire in the bus, burned on the route Samara-Shymkent in Kazakhstan, told RIA Novosti the representative of the regional Department of emergency situations Vitaly Sinev.

While there are other versions of the tragedy.

“Of course, prosecuted. All the Prosecutor’s office, the Department of internal Affairs, emergency Department, emergency medicine, and also a Commission under the chairmanship of the Deputy akim (Governor – ed.) region — to understand”, — said the interlocutor on the phone.

In the morning in Aktobe region burned the bus, which was traveling 57 people. 52 people were killed, five, including three drivers, were able to get out of the car. According to preliminary information, all victims — citizens of Uzbekistan, the drivers, the people of Kazakhstan. Russians in the cabin was not.

The place of work, police, rescuers and physicians. Victims assisted. They burned mild. According to doctors, none of the survivors didn’t need hospitalization.