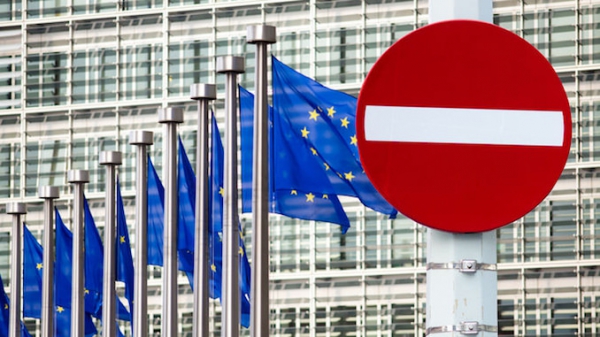 30 Jul 2018 the European Union imposed new sanctions against six Russian companies, building a bridge between Crimea and Kuban. Duty act of bureaucratic arbitrariness is interesting in several aspects, which characterize the degeneracy of the sanctions policy and European solidarity on the Crimean issue.

First of all, a remarkable date “punishment” for the construction of the largest bridge in Europe. The task of construction of the bridge represented by the President of the Russian Federation in March 2014 – just three days after the referendum on the Peninsula and two days after its reunification with Russia. Design work began in the spring of the same year, construction of technical facilities on the ground – in April 2015. Piling work started in early 2016. Car part put into operation three months ago, the railway is 80 %.

If the EU wanted to prevent the construction of a unique bridge between the Russian Crimea and the Kuban, sanctions disappoint in content and slightly late. For three years, if not more.

The motivation of bridge contains two sanctions of rebuke – “to consolidate control of Russia over the Crimea and Sevastopol” and to “further isolation of the Peninsula from Ukraine.”

First, we can agree. Any adequate state to seek to control their regions and conduct consolidated policy. Otherwise it’s Libya or Somalia or…

The EU is pleased with the lack of the Central Libyan government’s consolidated control over the fragments of the country?

EU approves migration flows through Libya, accompanied by wild lawlessness, slavery, the criminalization of European cities and conflicts within the EU?

The European Union welcomed the Somali pirates, corpse worms bred on the remains of the Somali state? Their activities have led to massive casualties for the elimination of the pirate plague has required serious efforts of the international community. With a microscopic contribution of the EU, among other things.

The second reproach Frank shocking – if anything, distilled – cynicism.
That is “further isolation of the Peninsula from Ukraine” is not connected:

“Further isolation of the Peninsula from Ukraine” is not dependent on announcements of electronic, network and other blockades in the Crimea.
From virtual acts of sabotage against the construction in the Kerch Strait bridge and real Subversion of the Ukrainian military intelligence.
From the fictional paintings full of savagery in the impoverished Russian Crimea, you draw in post-Maidan media for the fifth consecutive year.
From the monitoring of the Ukrainian authorities and media products all over the world, where the Peninsula is designated according to the actual situation.
From the isolation of the authorities from the European visits to the Crimea and Sevastopol to get acquainted with objective reality, finally.

Of course, “further isolation of the Peninsula from Ukraine” has nothing to do with Kiev reformers neglect the needs and aspirations of the 2.2 million people in Crimea – among them supporters of Ukrainian statehood in the summer of 2018, even less than in March 2014. Although the referendum for return to Russia voted 92 % of the participants.

The interposition of the EU decision-decorated publication in the journal of the organization, and judging by the sudden enthusiasm in the Kiev offices – without the consent of an associated partner. This decision is accepted by the Ukrainian authorities as “another strong signal of solidarity” and a means to increase the trade turnover of Ukrainian ports in the sea of Azov. Although no bridge turnover is not a hindrance – unlike unilateral sanctions, Maritime lawlessness, policy of “Residual proschevay!” and the subsequent surprise damage in your own pocket.

The interposition of the EU decision does not affect the work of the sanctioned Russian companies and soon aims to protect the interests of European businesses in the construction of large infrastructure projects.

“Another strong signal of solidarity” does not prohibit the purchase of European equipment, turbines Siemens in the Crimean CHP evidence.

In the construction of Crimean bridge worked dozens of foreign companies and hundreds of units of special equipment. Many bulldozers, excavators, cranes and other equipment in huge letters was written words such as Komatsu, Shantui and even Caterpillar. Brands from the EU “flag” is not demonstrated, but the white flag of surrender, throw in no hurry. It is known about the supply for bridge crossings of several types of Ukrainian industrial goods – companies under the control of “Patriotic businessmen” from the top steps of the pyramid.

To abandon the profitable market is easier said than done. Let the words and put in the sanctions Declaration is case take into account the real situation not only on geographical maps.