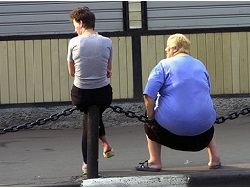 After four years in Russia, the incidence of obesity has doubled. About this newspaper “Izvestia”, citing data from Rospotrebnadzor report “On the state sanitary and epidemiological wellbeing of the population in Russia in 2016”.

“The incidence of obesity among the adult population aged 18 years and older with first time established diagnosis in 2015 increased compared with 2011 in 2,3 times. The projected upward trend of this indicator,” the report said.

The highest incidence of obesity noted in the Nenets Autonomous Okrug, Altai Krai and Penza region.

The Ministry of health publication confirmed this disappointing statistics – the number of people falling ill with obesity, is increasing.