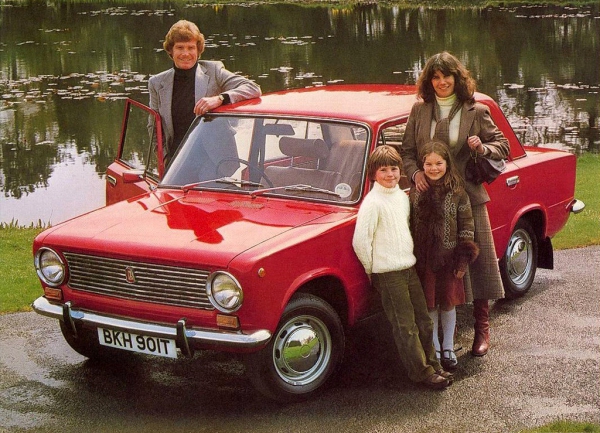 So, friends — today will be a very interesting post about how hard it was to own a personal car in the USSR. Here fans the scoop periodically tell stories about what the USSR was all perfect, but really all this talk is far from the truth — unlike for example the USA where the average family had its own two-storey house and one car, two cars, a beggar of the Soviet “middle class” lived three generations of a family in free one-bedroom Khrushchev, and the car at best owned every 10th family — according to statistics in 1985 on 1000 inhabitants of the USSR had a total of 45 vehicles (owned mostly in the larger cities), while in the United States in the same year, 1,000 people had as many as 535 car — nearly 12 times more!

Besides, the Soviet infrastructure at all expected of a person of personal transport — which was very casual, ordinary household and an integral thing in developed countries. In the USSR there were very few personal garages, there was practically no normal car-care centers and overall it was not a normal market of spare parts — all of these things were”inherited” from a purely Soviet humiliation, with the help of bribes and “Dating.”

Recently on YouTube I found a gorgeous short documentary in 1984 called “Dad bought a car”. It’s interesting that in this (even the pre-perestroika), the movie quite honestly and objectively showed the gesture of owning a car in the Soviet Union — no storage, no place to repair, and due to the permanent shortage of spare parts at night twisted wheel…

So in today’s post — a review of the film about the horrors of the Soviet motoring. Make sure you check out the article below, write in the comments your opinion, well to friends to add do not forget) And telegram channel also subscribe.

02. The film begins with the purchase of the car the average Soviet kind of dad. Here by the way omitted a very important part of what tremendous efforts were required to purchase a personal vehicle in the scoop. First, the car was a giant Soviet salary money (which is necessary it was unclear how to collect), and secondly — buy a private car you also had to “allow” photo this “permission” I published here in this post.

In General, the dad in the movie buys a car — the solemnity of the situation resembles the process of marriage in the registry office or at least purchase a small oil refinery. Yes, buying a personal car in the USSR was such a rare and solemn event: 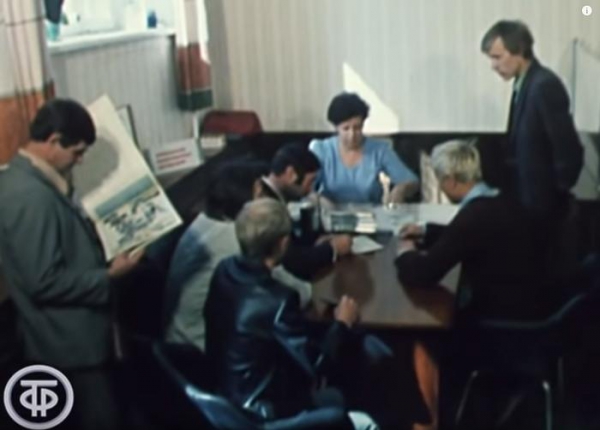 03. Here’s how the reporter deals with a family who bought a car. The husband and wife say that it would be good if the car was in every Soviet family — but as we know, in 1985 (a year after the film was made), the Soviet Union had only 45 private cars per 1,000 people. Still, the family says it plans to drive nature. 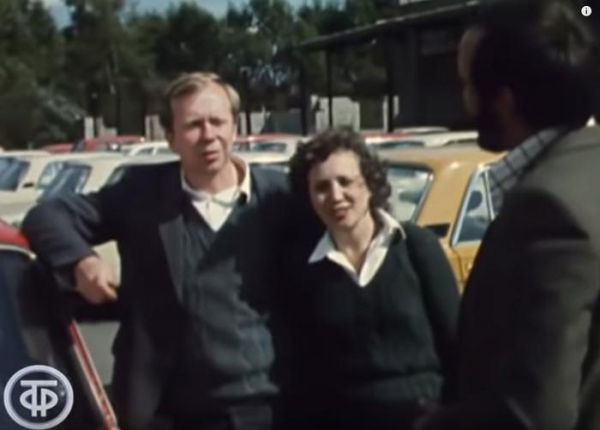 04. In General, the first joy is, and then the problems begin. Garage the family doesn’t have to join the queue for its construction before the personal car was impossible. Dad priezjat to the Parking lot — but then he is told that the seats available in a small Parking lot there is not expected. To the hints of Pope, “well, maybe the place is somewhere else,” the head of the Parking answers that do not and will not (that is, not even for a bribe). 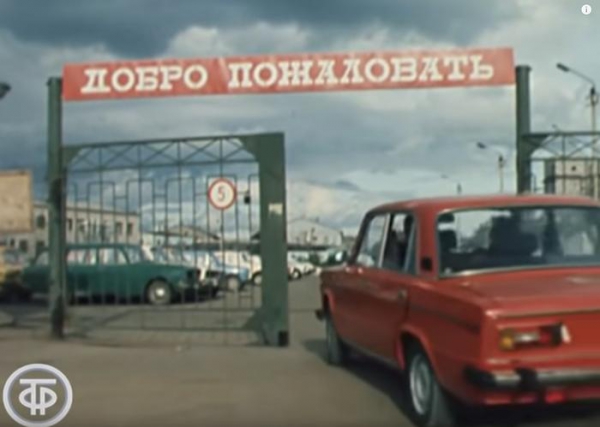 05. Dad-motorist rides on a car in the yard of his house — which was not designed for the Soviet presence in the family car and dad had to Park on the lawn. The car was immediately surrounded by curious children. 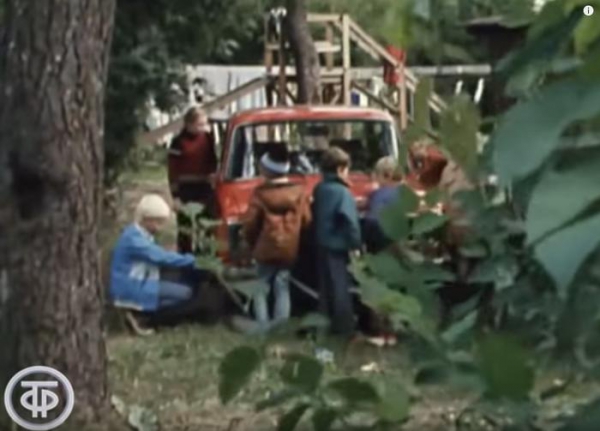 06. Then they show footage haphazardly parked vehicles — cars scattered directly on lawns and walkways near the entrances. Note also that despite the summer, a car covered with a layer of long unwashed dirt — a normal car wash in the USSR really was not, and to wash the car in the courtyard of the flats was a real problem. 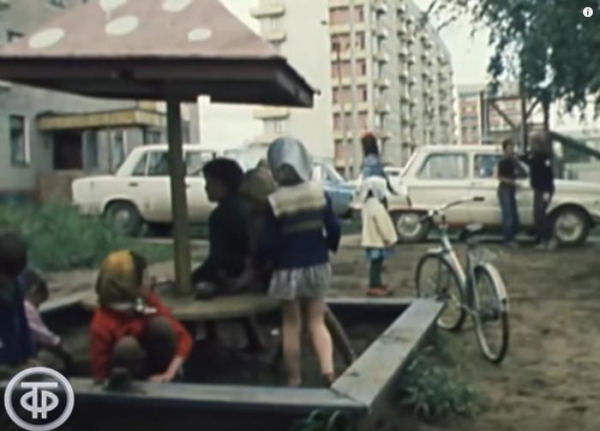 07. In the next scene, we show the attendants who are busy with meaningless Soviet pensioner classes — like a game of dominoes. Grandmother hiss on motorists abusing them for “slams the door” and petrol exhaust, which is called “gas” (“gas poison us all day!”) criticism in General is fair, but it is important to further the social aspect of envy. Owning a car in the Soviet family as it rose to a higher rung on the social ladder, and many of the neighbors started to hate her.

Do not tell tales about “equality and fraternity” in Soviet society — there could hate a person just because he eats butter instead of cheap margarine, not to mention buying such expensive things like cars. Marxism hasn’t made people happy — his false theory of the “classes” he has learned to find a more successful and hate them. 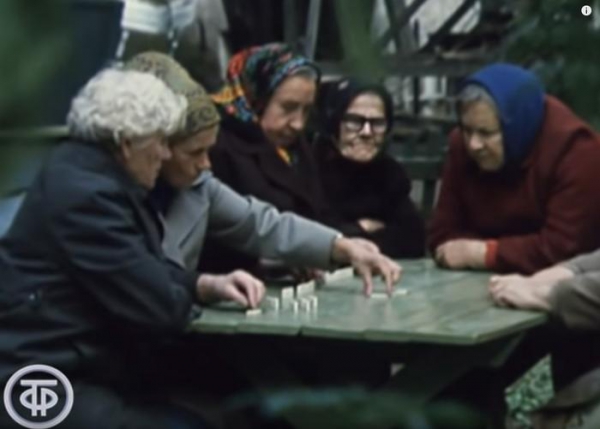 08. Next, we see the same Soviet Avtomobilist — which from manhole repairing his long-eared Zaporozhets. Service stations in the USSR-almost was not, and each motorist had become a mechanic. The owner of “Zaporozhets” rightly enumerates all Soviet schools of motoring, bending his fingers to wash the car there is no place to put in paid Parking — a problem to enter the garage cooperative — problem and a huge queue. 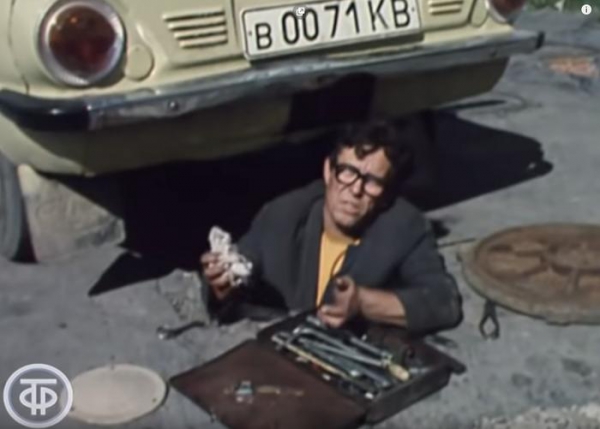 09. The following frames show some mind-boggling devices that will independently masterat Soviet owners to get to load — in the frame we see the concrete beam, laid at an angle on a concrete block at the top of this makeshift trestle is a green “Zaporozhets”. 10. The VoiceOver announces that the film’s protagonist — the father — is somehow lost weight and grew thin. The Pope himself says that it was difficult to sleep at night — “the car must be somewhere to attach”, and he is constantly afraid that something will happen in the yard at night. Hey, sociely, where are your stories about “the keys under the Mat, honest living but poor”? 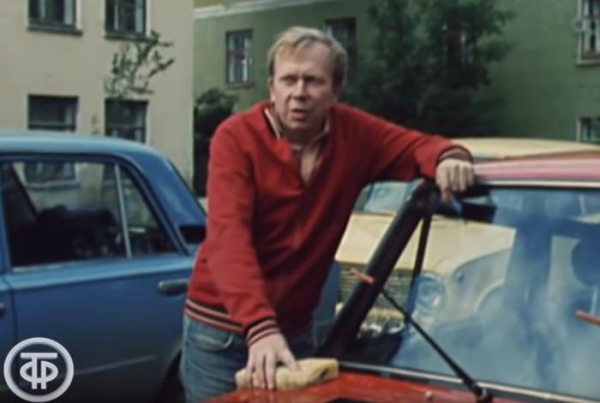 11. Then the camera briefly shows a few razderbanennuyu cars in the yard — judging from the dents, car was in small accident and was standing in the yard without repair (repair was a problem), and gradually took the spoil of spare parts — at night the car got ripped off, removing even the wheels and headlights. 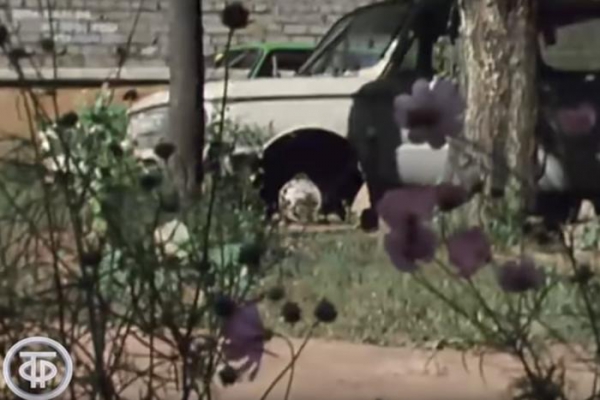 12. Dad pestered garage cooperatives, where he is told that the queue for the garage — 1000 people have to wait at least five years. And then we show shovels garazhnyjj KOOPERATIV so-called “samozastroy” — where motorists were simply allocated land, and they themselves with their own hands erected garages. In the frame of the car owners say that the building is not what the — all the materials are scarce, all have to knock out a fight (and obviously for bribes). 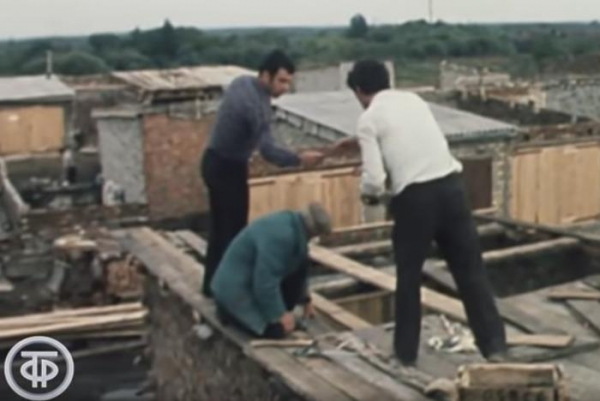 13. Further, we again show dad whose car the night I stole two wheels, battery and wipers — and it happened most likely in reality, not as a fictional movie plot (the speaker emphasizes). The police prepares a report and inspects the machine. Since buying the car in only five days. 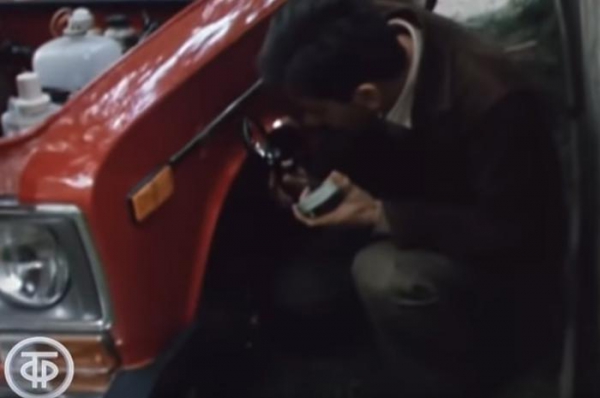 14. The next frames show the life of Soviet cooperative motorists all day lying under the car, something picking at the suspension or under the hood. One HUNDRED in the country, though there, but did not really work. 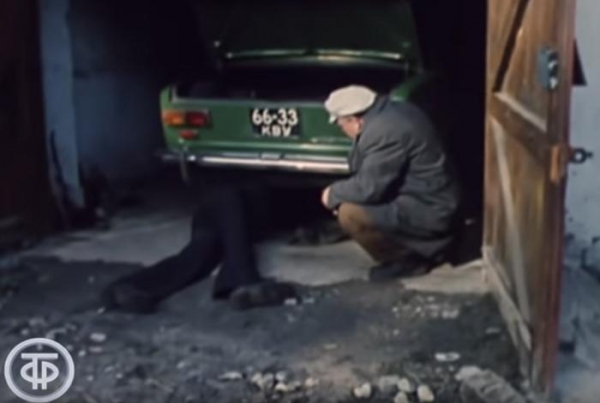 15. About a HUNDRED shovels tell you in the next episode — as explained to us, the speaker, at a time when the stations were laid, no one expected that cars would become such a “huge number” — as many as 45 pieces per 1000 residents! I am impressed from this amount. This is pure “planned economy” — in a country with a free market need a number of HUNDRED would appear in response to the demand for 1-2 months. 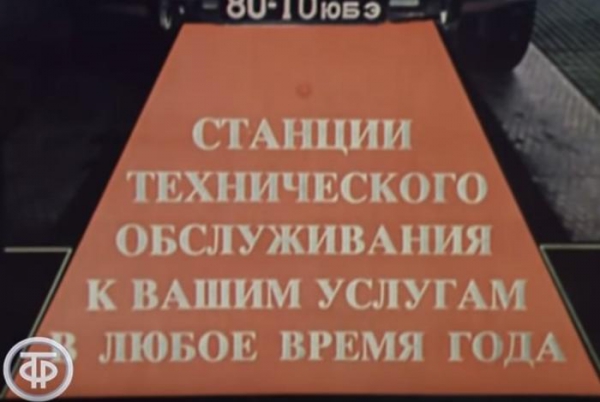 16. And then we show the internal life of this car, some young long-haired lout boorish and pure Soviet manner of communicating with a huge queue of motorists. Such shovels rudeness arise wherever the state is a monopoly on services where there was no competition — the sellers could podgo to bully customers, rude, insinuating bribes — knowing that customers will still come to them as a commodity (or resource) to get nowhere else.

At the end of the episode shovels autoservice hairy hamley says that the car they will fix soon in next month, and all the rest says “today, comrades entry is finished, please come next Saturday at eight in the morning“. 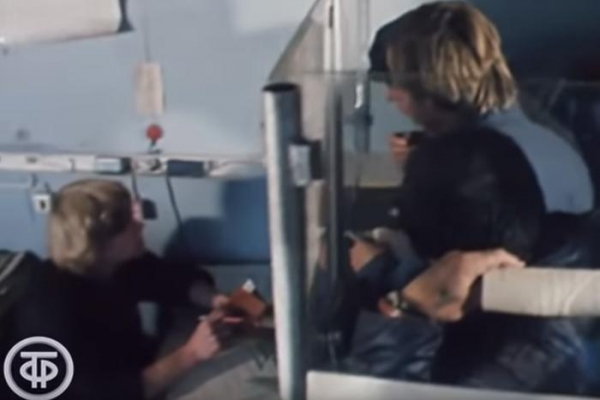 17. Drivers tell that stalling of the car in this service station shovels badly — spare no persistent queues cannot be made maintenance work on the service book, everyone is doing the twist “by eye”. In General, the same thing happens as in the rest of the Soviet sphere of services — you get nasty, wipe about you legs, seeks a bribe and still do bad. 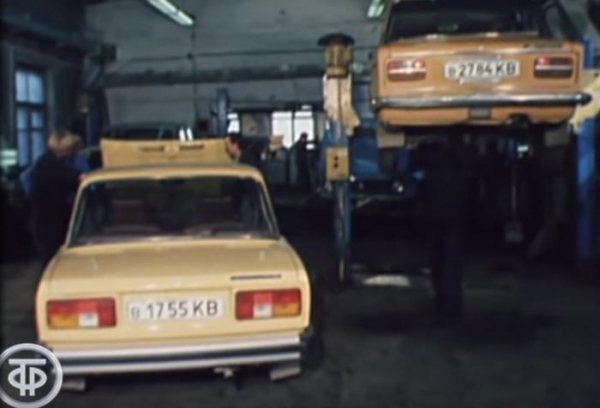 18. In the next episode we show shovels spare parts shop, where the seller says that he goes 10 years on “the Zhiguli” and basically fix it all and be without a service station (probably from the hatch in the yard or out of the pit in the garage), but in principle there is no spare parts — everything you need to “find and get”. 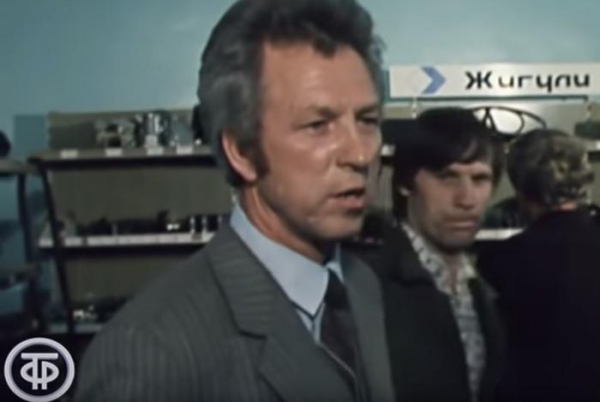 19. At the end of the film we also demonstrate a kind of “society of auto, motorcycle enthusiasts” — where for help went desperate to change things motorists. The Chairman of the society — some old mushroom, but the very “society” is a typical pseudo-Soviet organization, which has no effect. It tells the mushroom “we can only advise drivers on traffic safety”, etc. In General, this is a great movie that I definitely advise to look to all fans of the scoop version of the movie available on YouTube. To look at least to be aware of the fact that no “Americans” and no “powerful Jews,” not the Soviet Union fell apart, it collapsed by itself, including from such a household absurdity with which ordinary people faced every day. Very pity that many now have forgotten about it, preferring tales of “the world’s best ice cream”…

And you faced the cars in the USSR? What are your impressions? What do think about all this?