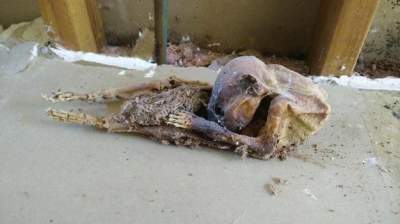 Users of the forum have tried to explain the origin of beings.

One of the users of the network during the repair in your house found right in the wall the remains of an unknown creature. He posted the picture online, and was puzzled by users, who began to wonder about the origin of the creatures.

Most people appreciated the version that is “the remains of the house elf Dobby from the universe of “Harry Potter”, who “did not wait for his sock from the owner as a symbol of freedom.” Other popular versions appeared the mysterious Chupacabra, Gollum from Lord of the Rings, which survived the fire of mount doom, and even the unlucky Santa Claus. Finally, users agreed that the mysterious creature is the undisputed winner in the game of hide and seek. The author of the publication noted that in addition to the mysterious skeleton he found in the walls of many of the remains of rats of different sizes.