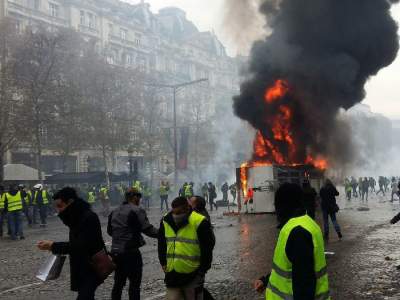 The country has made concessions to the “yellow jackets”.

The French national Assembly approved the government’s proposals, in particular concerning the introduction of a six-month moratorium on environmental taxes in the fuel sector. The vote took place on Wednesday after discussion, the deputies of the report, Prime Minister Edward Philip. A live webcast of the meeting is on the website Natssobraniya.

As Chairman Natssobraniya Richard Ferrand, the adoption of a package of tax measures designed in response to the demands of the movement of the “yellow jackets” made 358 parliamentarians, against – 194. “The national Assembly approved the government’s proposals on environmental taxation and its impact on purchasing power,” said Ferrand.

Among other proposals, supported by members of the lower house of Parliament, the moratorium on tariffs for electricity and gas and repeal the increase in the cost of technical inspection of cars.

Now my position should Express on Thursday, the Senate is the upper house of the French Parliament. An appeal to the senators addressed by the Prime Minister of France.