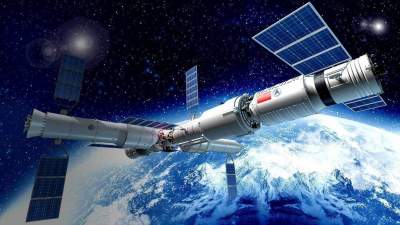 It is out of control.

The first Chinese space station “Tiangong-1” will stop ballistic existence in orbit and will enter the dense layers of the atmosphere in the last days of February, according to the American specialized site data System of space monitoring of the United States.

According to the forecast, which will be constantly updated, this will happen roughly 22 Feb. That day unburned in dense atmosphere debris of the station, whose mass is 8.5 tons, can reach the Earth’s surface.

Data about controlled or not in present station, is not available.

If her flight is unmanaged, it can fall in the band between 42.7 degrees North and South latitude.

If the flight is controlled, Chinese experts on the existing international practice can flood the station in a remote area of the World ocean.

The accuracy of the forecast time and location of a possible fall of the wreckage of the station with in the international catalogue number 2011-053А, American — 37820, will increase as it approaches the specified date.

Now the spacecraft is in orbit at an altitude of about 300 km. it is Expected that the uncontrolled return of the station to Earth will occur between January and March of 2018.

As the head of the Department of space debris in the ESA’s Holger Krag, from the geometry of the orbit of the station it is already possible to exclude that any of its fragments will fall to the North of 43° N. lat. or South of 43 ° s. sh. Therefore, the landing can happen at any point between these latitudes, in particular in certain countries of Europe. “The date, time and the geography of re-entry into the atmosphere can be predicted only with high uncertainty. Even shortly before re-entry it is possible to count only very large temporal and geographical window,” — admitted the expert.

A large part of the space station is expected to burn up in the atmosphere. But because of the weight of the apparatus and used its construction materials there is a possibility that some fragments still reach the Earth’s surface. In the history of space flight has never been recorded casualties from falling space debris.

“Tiangong-1” is the first Chinese spacecraft class orbital station. In 2016, China launched the Earth’s second space station — “Tiangong-2”. In 2018 it is planned to launch “Tiangong-3”, and then create a multi-module large permanent manned orbital station.