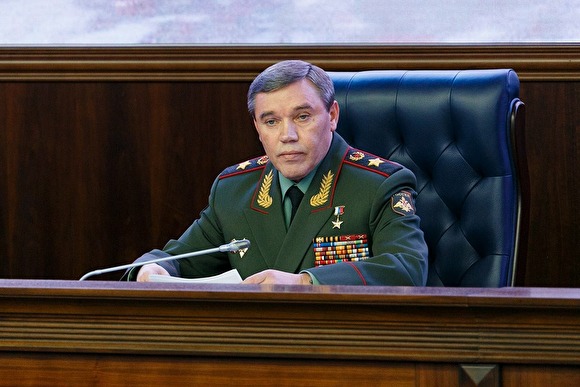 The family of the head of the Russian General staff Valery Gerasimov owns real estate with a total value of from 100 to 150 million rubles: apartment in a residential complex in the North-West of Moscow and a summer residence about 30 kilometers from Moscow, writes “the Present time”. According to the publication, to the family of Gerasimov to acquire such property, they would need over 30 years to defer all of their income. After all, since 2009, Gerasimova earned slightly less than 31 million roubles, provided that one-third of this amount, the General got in 2018. The average chief of staff was making 2.9 million a year, and his wife 167 thousand rubles, writes “the Present time”.

According to the publication, in January 2013 wife, Valeria Gerasimova issued in his own apartment in the house № 14 in the street of Aircraft designer Mikoyan, from the data of Rosreestr. Area of the apartment is made up 131,5 per square meter. Date of transfer of ownership coincides with the data of the Declaration, the heads of the General staff. This apartment is located near the building at the address Khoroshevskoe highway, 76 “b”, where is located the headquarters of the Chief of the General staff (former GRU). In the headquarters of the military register private cars, and they live mainly near literally across the street, the newspaper writes.

Mikoyana, 14 — a residential complex business-class “Private Square”. Now in the residential for sale, four apartments, similar in size to housing families Gerasimov. The average cost per square meter — a little more than 381 thousand rubles. Thus, the estate of the spouse of the head of the General staff can cost about 50 million rubles.

In addition, according to “Real time”, the family of the General has a country house in the cottage settlement Afineevo. The property in the village equal in value to the settlements on Rublevo-Uspensky highway several times: for a house of 200-300 square meters and a plot of 15 acres will have to pay an average of 39 million rubles. General, according to the newspaper, settled in this village over ten years ago, in total he owns a plot of 21 weaving. In 2014, he has built a house with an area of 554 square meters, and a few years later — a bath in 236,3 square meters, follows from the data of Rosreestr.

The owner of this property is hidden in the statements of Rosreestr: all objects owns “the Russian Federation”. But the parameters of the house, baths and the plot coincide with the data of the Declaration, the heads of the General staff, and Gerasimov himself and probably his wife Olga, the co — founders of the society of developers, “Afineevo”. The approximate cost of their country estates can range from 50 to 100 million roubles, writes “the Present time”.