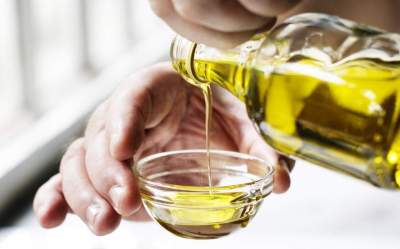 Oil is useful to lovers of fatty foods.

We so often hear about the benefits for the body with olive oil first pressed Extra Virgin that give preference to him unconditionally. But what is actually so good olive oil? Scientists were able to prove that olive oil is good for the lovers of fatty foods, and Extra Virgin olive oil actually reduces the risk of fatty liver.

Scientists again and again conducting studies on the beneficial effects on the body olive oil. Thus, the results of one of them showed that due to special compounds in the composition of olive oil can compensate for the harm of fatty foods. Previously found that olive oil extra virgin Extra Virgin is able to reduce the risk of cardiovascular disease. Now a team of specialists under the guidance of Dr. Rodrigo Valenzuela of the University of Chile took up the study of the effects of this oil on the health of experimental mice.

Researchers believe that the beneficial effects of olive oil are largely due to part of it with hydroxytyrosol, a polyphenol known for its antioxidant properties. In the new work has also been shown that this compound possesses hepatoprotective effects. The results of a study published in Lipids in Health and Disease.

Dr. Valenzuela and his colleagues studied the effect of hydroxytyrosol on mice fed a fatty food. Scientists drew attention to the special enzymes that play a key role in the synthesis of polyunsaturated fatty acids. As you know, they are able to lower “bad” cholesterol, furthermore, they positively influence the condition of cardiovascular system, brain function and cell growth.

Experts have divided the laboratory mice into 4 groups of 12-14 each. Mouse from the first two groups received a meal with 60% fat content. In the feed for 3-th and 4-th group, the fat content was only 10%. In addition, part of the mice were given hydroxytyrosol 5 mg / kg of body weight per day for 12 weeks.

At the end of the experiment, the experimental mice took blood samples and tissues for analysis to determine the influence of diet on fatty acid synthesis, enzyme activity and the severity of oxidative stress. It turned out that mice fed a diet with high fat content, and increased as total cholesterol and levels of low-density lipoprotein (“bad” cholesterol). The level of high-density lipoproteins (“good” cholesterol) did not change. However, on a background of reception of hydroxytyrosol negative impact of cholesterol on the health status of the mice decreased.

Fatty food was the cause of elevated markers of insulin resistance and in mice that received hydroxytyrosol, this almost did not happen. However, indicators that were observed in the control group, with the help of hydroxytyrosol could not be reached.

It is also important that liver of mice treated with fatty foods, start to produce less of the enzymes required for the synthesis of useful polyunsaturated fatty acids. The imbalance of fatty acids were detected in liver, brain and heart of mouse. In fact, began in experimental non-alcoholic fatty liver disease. In addition, the ketogenic diet has led to increased level of oxidative stress in the liver.

But mice fed and high fat diet, and hydroxytyrosol, the activity of liver enzymes was at the same level as in animals from the control group. Therefore, the researchers concluded that relatively small doses can reverse the damage that fatty food causes the liver.