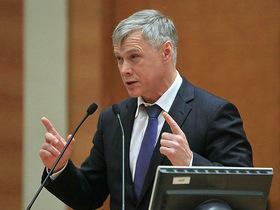 The Deputy of the state Duma from “Fair Russia” Valery Hartung rebuked the leaders of a number of banks reluctance to make advances to borrowers who are in difficult situation.

Speaking at the plenary session of the State Duma, the MP said that at the last reception approached by several dozen citizens who were in a difficult situation due to the fact that in December 2014 fell sharply, the ruble. Then currency mortgage borrowers fall into a difficult situation.

According to him, most banks have met the borrowers and solved the problem. For example, Sberbank, which, without waiting for the decision of the Central Bank, in the vast majority of cases settled the problem of foreign currency mortgage and all problems have been solved, while the other largest state Bank, VTB, did not go on this way, said Hartung.

“I was at a reception at the VTB management, asked to analyze all cases to find a mutually acceptable solution, still I can not get any acceptable conditions. But it is very simple: the borrower is caught in a difficult situation, is willing to pay the money, but he is such excessive conditions put, that he agree to in a year or two again coming with the restructuring of these obligations. Why just Bank not to meet and not to sign the agreement, provided all possible payment?” — complains Deputy.

He also pointed to private Bank “DeltaCredit”. “Today, he joined ROSBANK. Probably, the bankers, remember the saying “Profit above all”, but forget probably the second part of this saying — “Honor is more important than profits.” Here in pursuit of profits bankers are just people drive in bondage”, — said the MP.

So, according to him, “Moskommertsbank” “evicting a large family, whose five children, from a single housing.” However, he pointed to the presence of the court, where they will be permitted before the end of the year accommodation in this apartment. However, the living space, continues the MP, the Bank rents out “a group of young bearded men.” “Okay, Yes, what conditions are created”, — he added.

Another example is associated with “Raiffeisenbank”. As told Hartung, borrower Lily Alekperov became disabled after he slipped in a Bank and broke his spine. The woman suffered lifelong disabilities.

“The insurance case. The insurance company refuses to pay, the court of first instance recognizes the insured event. What makes a Bank? The Bank together with the insurance company protests the court decision and have been trying to a woman who became disabled, to deprive a single housing. It would seem that there and economic interest to the Bank, well, no, Bank, finishes the borrower, which, incidentally, has already paid more than you did, returned to the Bank more money than he took. With these situations a lot,” said the MP.

According to Hartung at the request of the Bank, it was possible to solve these problems, and the government is ready to help.

“Often, when a citizen or the government is ready to give support, the Bank did not agree, and nothing here can do about it”, — said the Deputy.