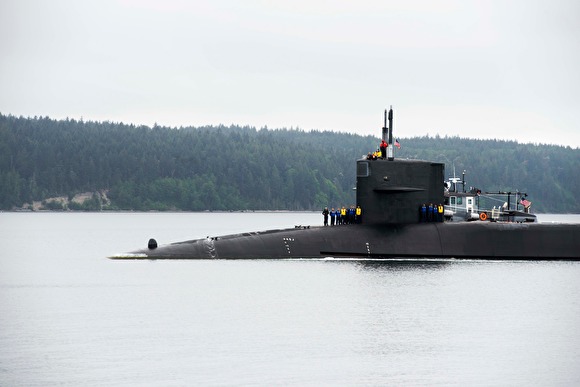 On 1 July, during bathymetric measurements on one of the research deep-sea submersibles, the Russian defense Ministry, a fire occurred that killed 14 sailors. In the mean the official statement of the Ministry of defence said that the incident occurred in Russian territorial waters, and the machine is now at the naval base in Severomorsk. Journalists and experts are inclined to believe that we are talking about nuclear research submarine as-12, which bears the unofficial title of “Losharik”, but to be sure some of the versions is not possible — information about the incident is classified.

On the tragedy became known in the afternoon of 2 July at about 16:30 Moscow time, when the media began to broadcast the official message of the Ministry of defense. The cause of death of divers of the Ministry called the poisoning with burning products. It was not reported where there was an emergency. Since the unit is reported to the military, was taken to Severomorsk, which is located in the Kola Bay, then an accident could occur in the Barents sea, experts suggest.

Later, various sources reported that we are talking about “Losharik” — deep-sea research apparatus, so named for the design features under the hull of the submarine spherical cylindrical compartments connected by “corridors” between them that resembles to the character of the Soviet cartoon balloon animal — horse, consisting of balls.

The maximum number of crew on the “Losharik” — 25 people. Displacement — 2 thousand tons, maximum speed — 30 knots (55 kilometers per hour). Other characteristics of the underwater vehicle in the sources vary, for example, the maximum depth is specified from 1 thousand to 6 thousand meters. Autonomous scuba diving — from several days to several months. The version with the “Losharik” was named the sources of RBC.

Based on the fact that this device was deep, he could belong to the 29th separate brigade of submarines, which is based on a military naval base Gadzhievo in the Bay Deer Bay. This team, which included deep-sea vehicles, BBC reports.

Gadzhiyevo is one of the most secret military bases in Russia. The 29th brigade is subordinate to the chief management of deep-sea studies of the Ministry of defense of Russia, the military units 45707, which is located in the Leningrad region. This information was confirmed by the acting Governor Alexander Beglov. He wrote on his page on the social network “Vkontakte”: “Bring deep condolences to the families of the dead submariners in the Barents sea. Team was assigned to our military units and the last sailing departed from Petersburg. The memory of our heroes will always be with us.” 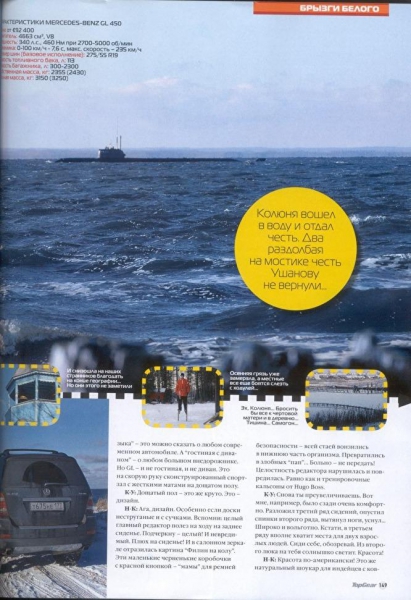 In 2015, the photograph, which allegedly depicted “Losharik” was published in the Russian version of automobile magazine Top Gear.

The sources in the “Open media” reported that the fire occurred not on the “Losharik”, and the sub-carrier. One of the interlocutors, the media writes that we can talk about submarine “Orenburg”, the second — on the ship “Moscow”. The version with the “Orenburg” is called other sources.

BS-136 “Orenburg”, built in the early 1980s and adopted for service as the K-129, for my life has changed not only the index but also the project, notes the BBC.

Originally developed for project 667BDR “Squid” as the carrier of Intercontinental missiles, it was rebuilt according to the project 09786 in the media of small submarines.

Submarine “the suburbs” was launched in 1984. In 1999 started the reconstruction, which ended only in 2016. After the reconstruction of the submarine it has installed equipment for transportation of deep-sea mini-submarines of project 18 270 “Bester” wrote “the Russian newspaper”.

The third carrier AC-31 “Losharik”, except BS-136 “Orenburg” and the BS-64 “suburbs”, can serve the nuclear submarine K-329 “Belgorod” project 09852, which should be the first to get six unmanned nuclear submarines “Poseidon.” Descent of K-329 “Belgorod” water on the “Sevmash” was held this year. It is known that the submarine is able to descend to a depth of over 500 metres and can reach speeds above 30 knots and joint tests with the “Poseidon” will take place this summer, writes Lenta.ru.

“BBC Russian service” contacted a resident of Severomorsk, which also claims that the fire happened at “Orenburg”. “At 20:30 an alarm was announced to the naval forces. At 01:00 the submarine itself came to the pier in Severomorsk”, — he said.

“Three compartments were flooded, the first 13 people to pristukivanija didn’t answer. When able to get to the compartment, found that all was lost”, — says the interlocutor of the edition.

The exact number of survivors is unknown, different sources reported that hospitalized 5 to 10 people. 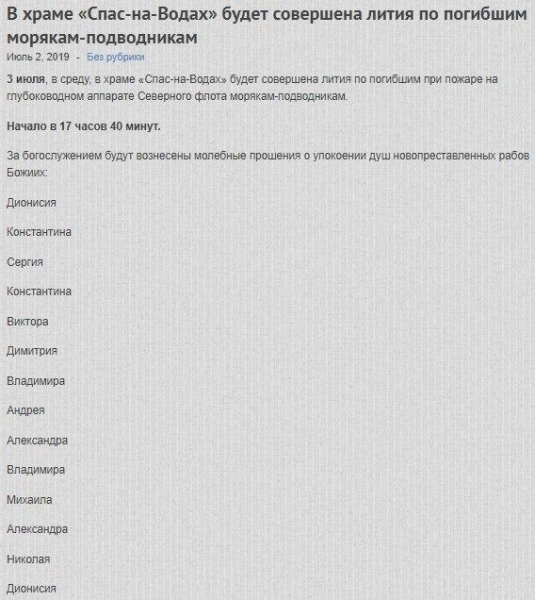 The site of the temple

At the time of this writing, the Temple “Savior on Waters” in Murmansk has published on its website the names of the 14 sailors killed in the submarine. Their names are not specified.

The causes of emergency

In conditions of secrecy and of the fragmentary information about the incident to speak about the reasons of tragedy is not possible. According to the Ministry of defence, the cause of death of the submarine was poisoning by combustion products. Why there was a fire, not reported.

Investigating the cause of the fire has been commander in chief of the Navy Admiral Nikolai Evmenov. The investigative Committee began checking on the fact of death of seafarers.

The Norwegian Agency for radiation and nuclear safety stated that, according to Russian officials, on Board of submersibles gas explosion.

However, the Ministry of defense announced that no notification Norwegians are not sent, says RBC.

Interviewed by “Komsomolskaya Pravda” the expert, who asked not to be named, suggested that, based on information on the number of victims, the fire was contained by sealing — the crew closed compartment, which started burning to save the ship. Such action involves “a Guide fight for survival” is the basic document that describes the actions of the team during an emergency. “There is a second option that the fire spread like an avalanche and the crew just did not have time to take, — the expert continues. But it seems to me less probable.”

According to him, none of the sub is not 100% secure from fire. The publication says that most fires happen because of technical failure (ignition of the motor windings, short circuit, failure of air cleaning systems and so on) or because of an error of the personnel. But here, just with the confidence to say anything is impossible until the results of the official investigation.

The Mission Of “Losharik”

It is known that in 2012, the media AC-31 “Losharik” was made by a nuclear submarine for special purposes BS-136 “Orenburg”. Then in the course of the expedition “Sevmorgeo”, which clarified the boundaries of the Russian continental shelf in the Arctic, as-31 “Losharik” was able to take samples of seabed with a depth of over two kilometers, which later formed the basis of the evidence of the affiliation Lomonosov and Mendeleev ridges to the Russian continental shelf. This writes Lenta.ru.

Examining extracted from the bottom of the Northern and southern parts of Mendeleev ridge basalts and dolerites, the researchers found that they originated in the lower or middle Ordovician, about 470 million years ago. The same nature has the ancient basis of the new Siberian Islands, which supports part of the continental shelf. The scientists also performed seismic and bathymetric surveys.

The total area of the submarine territories, which Russia sees as a continuation of its continental shelf (natural part of the mainland), is estimated at 1.2 million square kilometers. According to the Ministry of natural resources, hydrocarbon resources beneath the extended continental shelf are estimated at 5 billion tons of fuel — about 12% of world oil reserves.

Despite the success of “Sevmorgeo”, in the course of the expedition were damaged manipulators of the system of external lighting and the casing-31 “Losharik”. The repairs were completed in 2017, when was it conducted deep testing in conjunction with the carrier — the nuclear submarine BS-64 “suburbs”, the newspaper notes.

Meanwhile, the Pentagon believes the al-12 “diversionary device” intended for destruction of underwater infrastructure, mostly communication cables and systems for detecting submarines, writes The Bell. At a depth of over 1000 meters “Losharik” virtually invulnerable to modern weapons.