The creators of the blockbuster “Gravity” lifted the veil of secrecy over the picture, which was filmed in Moscow in conditions of extreme secrecy and with the support of the Ministry of defence with the participation of the latest military equipment of the Russian armed forces. 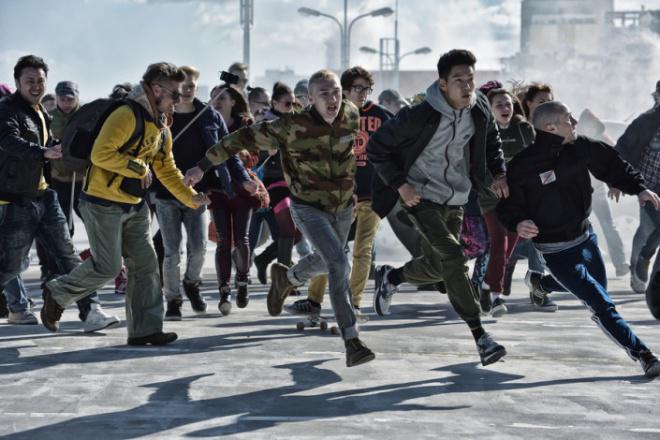 The crew of “Attraction” spoke about the film

In the network appeared the new trailer for the most secret and ambitious project next winter. The film by Fyodor Bondarchuk over a sleeping district of the capital, shot down an unidentified flying object. A large part of the Road cordoned off, is the question of the evacuation of local residents, and the special Commission decides whether to make contact with an extraterrestrial civilization. What will turn these events is unknown – the film-makers to share information is extremely localized, which raised the degree of expectations to the limit.

Alexander Petrov, the performer of the role of Artyom, explained the unprecedented secrecy:I think it is very correct. Thus the intrigue, first, remains. Secondly, every one will post, each photo will be valuable. And it will draw attention to themselves”.
What is known about the secret project “the Attraction” by Fyodor Bondarchuk
Before you go to the set, all band members special stickers to seal the camera on mobile phones. For good reason – the film will be a lot of fresh, original solutions, and to declare them ahead of time so as not to spoil the pleasure of viewing. The team working on the film, a lot of young and talented people who perfectly understand each other in real time, right before our eyes, creating a new cinematic language.

The film Director Fyodor Bondarchuk said:This is the story of the here and now with young artists. Sometimes my mind floats shooting period of the ninth company, but only because of some Association and that Association of young energy, because they conspire in one second and as a band exist”.
“Attraction”. Trailer
The operator-Director – Michael hasaya – not even 30 years old, and Fyodor Bondarchuk has to listen to him and affectionately calls child Prodigy. The older generation in the film, represented by such masters as Oleg Menshikov and Sergei Garmash. Their incredible acting experience in merger with ambition and liveliness, Aleksandr Petrov, Nikita Kukushkina, Irina Starshenbaum has created a miracle – there was that “attraction” because the name was not chosen randomly.

The role of Ruslan, Nikita Kukushkin says:the Actor needs to believe. And Fedor Sergeyevich suitable may say one word, but you see that kind of faith in you and other partners on the ground that he is in one word maybe something like this to change over the course of the river, which somehow ignited life.”
Dive into the history of relations between characters that unfold on the background of these dramatic events around the world, and believe in the reality of the situation, viewers will be able thanks to a razor-sharp picture and perfect digital sound – the film was shot in IMAX format. To see the landing of a spacecraft on the territory of the Russian box office will be January 26, 2016.

“Attraction”. Light installation at the festival “Circle of light”