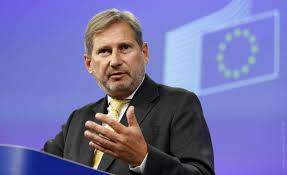 Probably Serbia and chernogor will soon enter the EU.

Serbia and Montenegro are likely to be the next countries that will join the European Union until 2025.

In an interview with Reuters, said European Commissioner for European neighbourhood policy and negotiations to expand Johannes Hahn.

The Agency notes that the European Union begins diplomatic efforts to accelerate actions that will connect the six countries of the Western Balkans to the EU.

“The time has come to complete the job in 1989,” said the Commissioner, referring to the EU’s enlargement to the East after the fall of the Berlin wall.

“We have set 2025 as the indicative date for Serbia and Montenegro that is not only realistic, but also very ambitious,” added Khan.

Next month Khan will also travel to Washington to meet with U.S. state Department officials to discuss support for the Balkans.

Also in may this year, European Union leaders will hold a special Balkan summit in Bulgaria, which until June holds the EU presidency.

According to the Agency, Albania, Bosnia, Kosovo, Macedonia, Montenegro and Serbia that hope to join the EU, in recent years, felt that their chances of membership decrease as the policy unit, which was faced with growing euroscepticism, the crisis in the Eurozone 2009-2013, the process of Brexit seemed to have lost interest in him.

However, the growth of Russian influence, the migration crisis in the region and the EU’s desire to strengthen European integration after Brexit the Balkans represent new opportunities.