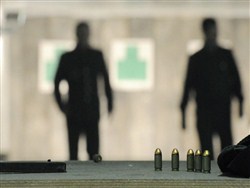 In the suburbs the collectors fired on the male debtor and his child.
The incident took place in the Krasnogorsk on August 23. It is reported that collectors used an air gun.
A man and his 9-year-old daughter were waiting at the entrance of the house by two unknown men. They introduced themselves as Bank employees and demanded to repay the debt. First, the debtor was threatened with a pneumatic gun. Then shots rang out, gives details on RenTV.

Police launched an investigation, reports RIA Novosti with reference to the Department of the MIA of Russia in Moscow region.
“It was reported that unknown persons caused injuries to the man with a child. Previously, these were the collectors, shot from an air gun,” said the police.