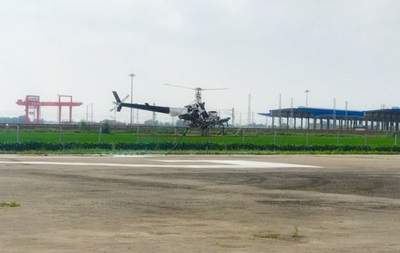 Unmanned Chinese helicopter development Sanjin-200 have successfully completed the test flights, said the Shenyang Institute of automation of the Chinese Academy of Sciences, the engineers who developed the drone, according to Xinhua news Agency.

As reported by the Junior researcher of the Institute of GU Feng, a new unmanned helicopter has a length of 8.7 m and a height of 2.5 m. Its load capacity is 200 kg. Novelty has become the country’s first large unmanned helicopter, which has passed the certification of the technology independent carrier-based takeoff and landing.

“The new product will be widely used in law enforcement operations at sea, agricultural production, emergency rescue and aid in other areas,” said GU Feng.

Shenyang Institute of automation is developing unmanned helicopters since 2003. They developed drones have been used in scientific expeditions to the Antarctic, search and rescue operations after the earthquake in Lushan County, the laying of power lines over the Yangtze river and other serious tasks.

Recall that in the Southeast of China, Guiyang has created a huge 100-foot waterfall that flows from the wall of a skyscraper.