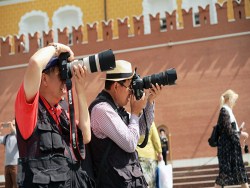 The West fears an Alliance between Russia and China. But for the Russians and the inhabitants of many Eastern European countries turned on its head: the Chinese live longer than they, and they have more money.

“Journalists don’t talk!” — strictly screaming Chinese guide, when the reporter Aftenposten is trying to make contact with a group of Chinese who flooded Red square.

The Chinese arrived in Moscow on Christmas shopping.

Every year the capital of Russia visited by more than a million Chinese, and it is really noticeable on the streets.

When one travel Agency in Moscow recently installed new signage was in Chinese — which was supposed to point the way to the red square, the Chinese laughed. “Red shit” is what was written on the label. It was quickly removed.

The Chinese are now crossed a historic milestone that both surprises and frightens the Russians.

The Chinese against the Russians

The Chinese for the first time in history surpassed the Russian in three very important ways, many speak about the conditions of life.

1. The Chinese first began to spend less of their money on food than Russians, according to new data for November.

2. In China below the poverty line to 43 million people, representing 3.2% of the population. In Russia, the poor are 20 million citizens, accounting for 13.5%.

3. In the same period, the Chinese have surpassed the Russians and life expectancy. Life expectancy in Russia — 71,9 years, and in China is 73.6 years.

Russians are not the only Europeans that will pass.

Chinese people now spend less money on food than people in countries such as Ukraine, Belarus and Romania.

Norway, which, in principle, is in the highest positions in all international ratings, now — as a result of higher prices for food in the country — descends the index, compiled by the U.S. Department of agriculture.

Below all of Europe are the Russians, Belarusians and Ukrainians, who are forced to spend from 32 to 38% of their income to fill the fridge.

The collapse of the myths

“Russian hard and frustrating to deal with it, says in an interview with Aftenposten Professor at the Higher school of Economics Igor Nikolaev. He is also the Director of the Institute for strategic analysis of the company “Financial and accounting consultants”, a member organization of independent accounting and consulting firms Grant Thornton.

— We, Russians, have long thought that much ahead of the Chinese. For several years, the situation changed radically. Now the Chinese spend on food is less money than we do, Russian, and this is a very clear sign that they have caught up with us.

— Real wages of Russians in 2014, falling four years in a row is a consequence of the economic crisis, lowering wages and raising prices. And in China, growth is continuing, says Nikolaev.

Even in 2017, when the number of arrows characterizing the state of the Russian economy, point up, real wages of Russians still falling.

From Putin’s flirting most wins China

“Eurasian Union” between China and Russia is presented as a sign that we are on the way to the new world order in the field of security policy.

The President of Russia Vladimir Putin and President of China spent a lot of warm meetings, during which it had signed a lot of major treaties on cooperation in the military sphere and in the sphere of investments.

But these latest figures leave no doubt who fared better: the ruble and the yuan:

• From 2014 to 2017, with the help of sanctions imposed after the annexation of Crimea, China has become the largest trading partner of Russia.

• The Russian trade deficit with China increased $ 8 billion by September of this year and continues to grow rapidly.

• Russia imports from China 21.4% of all imported goods. For comparison, the export to China makes up only 10.6% and major exports — oil, gas, wood and coal.

Russia between East and West

Both liberal and conservative critics in Russia, criticizing Putin’s policies, referring to the example of China.

The nationalists and the Communists believe that the example of China shows that the state-controlled Chinese system works better than monopoly capitalism in Russia.

Liberals and Democrats believe that the numbers say that the Chinese strategy is not working, and that Russia should not close the doors leading to the West.

The Chinese authorities use such statistics in order to present their policies as successful. They already caught on the fact that they often embellish these numbers.

“Our results are impressive,” said chief statistician of China, Csize ning (Ning Jizhe), when he voiced these figures at a press conference in Beijing.

In addition, the figures do not take into account the well-developed shadow economy, which in countries such as Russia and Ukraine is around 40-50%.

In the human development Index of the UN, based on data for 2015, Russia is still ahead of China due to the high GDP per capita and higher educational level.

“They are dressed terribly, but things are buying expensive”

Visa-free entry, cheap ruble and very reasonable tours is an important reason to go to Russia of many Chinese. Muscovites with whom talked correspondent for Aftenposten, the flow of Chinese are ambivalent.

In truth, what the Chinese are doing in Moscow, in fact, a little mystery for people. They often eat in Chinese restaurants, shopped in stores owned by Chinese, and rapidly disappearing, continuing to move on their own buses.

“The Chinese are attracted by the mystique of Moscow. Someone wants to see the Communist heritage. In addition, they say that, in their opinion, Russia and China — friends”, — said the guide-interpreter with the Chinese language Anna Stepanova newspaper Afisha.ru.

“They’re awfully dressed up, but I can afford to buy expensive things,” says another Russian guide in an interview with the newspaper.

“They are not too polite, always go in large groups, and never give tips,” says the correspondent of Aftenposten waitress Olga, working in a restaurant on red square. She asks you not to photograph her and do not give the name — afraid of losing their jobs.

Can we change the trend?

One of the most important issues in the debate in Russia on the eve of the March presidential elections is the following: what to do? Many ordinary Russians-and the experts expect big changes immediately after the election.

The Kremlin, for its part, is trying to show that the situation is not so bad. The Russians have still higher incomes, higher levels of education and abundant natural resources needed by China. Some public opinion polls show that Russians are more optimistic about the future than a year ago.

“The biggest problem is that the current momentum leads to the fact that the differences will only grow,” says Professor Nikolayev in an interview with Aftenposten.

“Russia cannot escape the large-scale, structural reforms in the economy. Otherwise the situation will become much worse.”