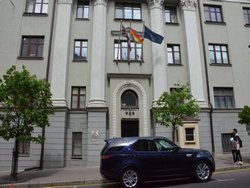 Same-sex relationships are fake. Belarus rests on the Foundation of the traditional institutions of family and marriage. So the interior Ministry commented on the actions of the British Embassy, which on may 17, the international day against homophobia, transphobia and biphobia, raises the LGBT flag.

The interior Ministry claimed that the regret may 17 on the British Embassy was posted on the LGBT flag.

“The initiative of a foreign state to create problems where they do not exist, can not be called successful,” — noted in the Ministry, commenting on the statement by the British Ambassador Fiona Gibb, who explained this step desire to draw “public attention on LGBT people and the discrimination they face.”

The interior Ministry claimed that on may 17 — international day against homophobia, transphobia and biphobia — never has been a memorable and significant day.

“The reason is obvious — the overwhelming majority of Belarusians adhere to traditional family values, including Christian. But statements of this sort — call these values” — believe in the power Department.

They point out that the Belarusian state protects the Union between a man and woman “as the only natural method of procreation” and “puts under his special protection, granting exclusive rights — including political and legal aspects”.

— Anyway, but same-sex relationships are fake. But the essence of forgery is always the same — the depreciation of the truth. The LGBT community, and this whole fight for “their rights”, the community day is just a fake! — said the interior Ministry.

They point out that “while we equally are open to the useful, necessary, progressive: for anything that will improve the lives of Belarusians and will contribute to the development of society as a whole.”

— We are for real, they will not pass! — summed up in the power Department.