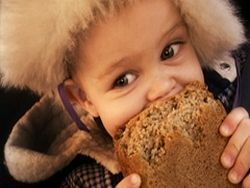 It is not a secret that in the years of Soviet rule, many strove to find a job through acquaintances. And for those who are not able to get into the “warm place”, I had to work a lot, but get little pay.

It happened with my parents. So when I was a kid, we ate only the simplest food.

I still remember how one day my grandmother shared the bones of “soup set” to millet porridge and toast, I asked: “And me ?”. I remember the confused faces of parents at the time. And I’m still ashamed of it “And me ?”.

It was just the time that now praise the hypocrites that the people lived in prosperity and happiness. Happiness someone might have been. But workers have mostly been “equality in poverty”.

Of course, residents of large cities lived better than the people in the peripheral areas of the country. But, in fairness, I note that in the capital the communal and hruscheby were not millionaires.

In the 70-ies of the last century of the trains in the morning were Packed with ordinary workers in an old and worn coat. They went to the factories to perform and exceed plans, about which said: “party Plans – plans of the people”.

How to know the youth of today that young engineer in the 70-ies started his ascent from 120 rubles a month ? Or that many women in those early years wanted to get a job in the Institute, in order not to bother and get a 80-100 rubles per month.

By the way, the salary in 150 roubles for Turner on salary in the 70-ies were quite tolerable. But the turners-stelisti received a half to two times more. But more than 300 rubles a month paid only to those who knew how to “make friends” with the boss.

Of course, in large cities, where there were many “mailboxes” and “closed” research Institute working in the defense industry, wages were much higher than in remote regions where the only “large” company was, for example, the match factory…

In General, we must honestly admit that the inhabitants of the periphery did not have enough money for food, clothes and many more. I remember with tears in his eyes told her teacher that can’t go with the class to the theater for “the Snow Queen” because we have no money.

Now of course, I understand that child a ticket to the show did not cost much. But for me then – in my childhood – it was a lot of money.

Once you had to buy me a new winter coat as of old I have grown. We went to a specialty children’s clothing store, where my mom worked friend. In the back of the store I’ve tried on many coats of different models, but they all had short sleeves (high, 3-y growth).

In the end, we were forced to go to a large Department store, where I found the exact same coat as I already tried that one but need, 5th growth.

I was immensely pleased that now I buy clothes in a Department store for adults, but not in the store for children. And my mother probably wanted to cry, as coats 5, the growth cost of 2 (two) times more expensive than the same coat 3 growth in the children’s clothing store.

Now, few people know that the workers were then paid little or very little. Is that lacking money is a Soviet citizen could not “snickering” and believed that all his troubles not to blame the partocrats, the nomenklatura and the bureaucrats, and foreign governments and the capitalists.

Moreover, poor people have always been willing to work extra hours, even for pennies. So, in the early 60-ies my mother, who worked as a nurse, wage was 56 rubles per month, then 60 rubles a month. And only since 1970, her wages to be raised to 70 rubles.

To us live, my mom had to work for two employees. But pay her two wages, and only 30 (thirty) percent more.

And only after many years, workers were allowed to work for two employees to “half rate”. Here’s what the employment relationship was under Soviet rule.

However, some are now telling the tales of how good life was under communism. Of course, in schools and vocational schools were taught free, and was the pioneer camp, and Union (discount) vouchers to the sanatorium.

But a coveted ticket I had to wait for years, if not to “knock out” because it wasn’t at all lacking. However, the workers were happy to go to a rest home, even in winter, because there they were free fed.

I want to remind you that the author talked about events more than half a century ago. So I suggest trolls and Muscovites, as well as those who are less than 60 years, not to Excel in writing hateful and “accusatory” comments.

Unfortunately, the bitter truth is not everyone likes. But it’s our country, it is our biography !