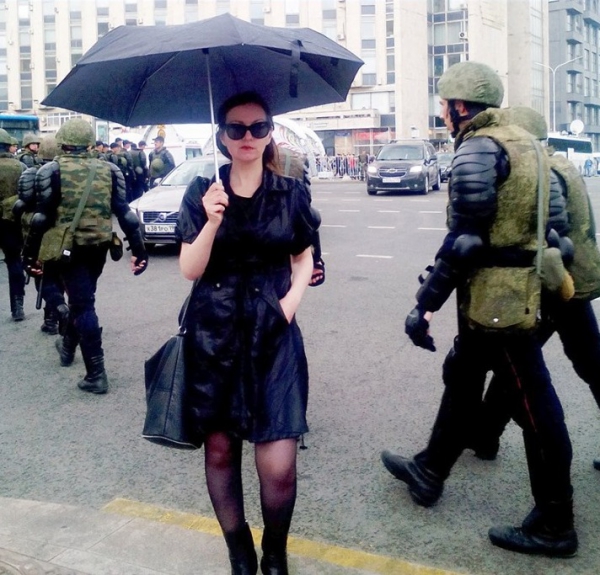 All visible the approach of autumn. The fall, which left an imprint on the past protests of autumn, which became an allegory of all that is happening in the political arena of Russia.

We are talking about it today with Alina Vitukhnovskiy, leader of the movement “Republican alternative”, author, analyst.

Valery Rozanov: Alina, many consider the recent events in Moscow as a kind of rehearsal of the coup government. Is it really so?

Alina Vitukhnovskiy: the very idea of revolution as a way to draw special attention to a tangle of systemic issues of power, making it a universal motive to serious political changes may not be effective. First of all, because it will be impossible to designate the beneficiary of this maneuver before getting involved in a protest by the people, for whom it is still current government, even in the face of seemingly succeeding managers.

The system itself, even being now in a stupor, will not risk its opportunities for rapid and flexible response to the protest threat, so the coup is now the least likely.

Alina Vitukhnovskiy: Each observer for what is happening in Russia today, trying if not to predict, at least to predict a few steps ahead subsequent system. However, at the moment it is almost impossible to do. All the analysis and all the insides — it is rather a projection of their authors, where wishful thinking. This equally applies to both negative and positive (revolutionary) forecasts in the spirit of Professor Nightingale.

Pessimistic forecasts basically boil down to the idea of Stripping the existing opposition field. And partly it’s very similar to the truth.

The evolution of protest over the last 10 years has undergone some significant changes. First of all, the protest from the nationalist nature has shifted toward liberal and, accordingly, has become less manageable. This is the first trend.

The second trend lies in the fact that he is significantly younger. Moreover, the new participants do not have a negative, and therefore, destructive experience, and inevitably produced a defeatist Outlook.

The third and most important trend — the protest has become almost bezrigelny. The absence of “irreplaceable” Navalny played no negative role in the events of 3 August.

I have repeatedly drawn attention to the phenomenon of irremovable opposition, a kind of mafia to gain a foothold in the political scene from the time of the murder, and still.

Now we have a unique opportunity to protest the new people, new leaders and new ideas. It is very risky but who does not risk does not drink champagne.

Valery Rozanov: Alina and the very atmosphere of those days, as You can describe, because as a writer You can feel all the nuances that simple layman would not notice sometimes.

Alina Vitukhnovskiy In Moscow was absolutely military atmosphere. Surreal soldiers modern Martian Chronicles, knitted together Imperial some aggressive commanding slavery, accustomed to the role of executioners of its own people.

Valery Rozanov: Thank You, Alina! Literally in a few sentences, You’ve painted a picture that is better than any TV story showed the events. Sort of ominous condition of impending internal war.

Alina Vitukhnovskiy: that Is so. But, at this stage in the war effective is the so-called bezrigelny protest. As we have seen, the absence of leaders such as Navalny and others had no effect neither on the organization nor on the size of the crowd. At the forefront right now are hipsters and libertarians, which I would like to say separately.

Modern Russian libertarians took the very archetypal niche, which was previously occupied by the NBP, long turned to the Kremlin’s red guards. And this is the perfect replacement! Young people are active, educated, critical. Pumped with information skills. That is, the propaganda did not take, in contrast to those of the national Bolsheviks, which was the flesh of the brutal Russian statehood. I remind all of you that now their leader is Michael Lights is in the dungeons. I believe he has a great political future.

Valery Rozanov: Alina, I saw Your comments from Sasha Sotnik. And You were totally against all this fuss around the elections. Didn’t see the point in getting people to the streets. Has something changed?

Alina Vitukhnovskiy: Yes, this time I did not call anyone out, because the streets became too dangerous. In fact, the authorities announced the society of civil war.

But I myself went, because the writer and, especially, politicians these days have to be together with his people.

Such wildness is always to evaluate not only from afar but also up close.When the streets beating citizens, a politician needs to be there. To the election agenda, I am just skeptical and think it is an intentional narrowing of the field of the opposition and PR small group of people — the opposition of the mafia.

Valery Rozanov: Alina, as if to draw historical analogies, for example with an armed coup in October 1917, where the role of Lenin was, in my opinion, is the key, whether it is possible to shift at the moment?

Alina Vitukhnovskiy: Lenin — the figure is disgusting and also pretty mythologized. But its main role in key current events becomes very interesting. This role was to bribe the generals of the secret police, who in the hour of X gave the order about effectively countering the insurgents.

This is the question of tactics and strategy. Essential elements of radical socio-political transformation is the ability to find timely solutions and resources.

Revolution costs money. But. If the revolution you have money, you don’t need it. This is the question — why is she still not happened.

Now the main “intrigue” of moment was an attempt to move the demonstration from 3rd August to 10th (consistent number). Of course, to the agreed meeting out do not need, but that’s not it. If the third number you go beyond the political slogans and requirements of the admission of deputies to the Moscow city Duma elections are political only formally, your actions have no meaning.

The main task of government is to prevent the transformation of protest from social to political. While the subject of interest are bureaucratic-organizational games around non-admitted candidates, signed the papers, etc., protest remains the social — that is, fully controlled and managed.

To the natural question of what to do, to answer directly I can’t. Any feasible political propaganda now falls under the article. However, any further action is inexpedient the emasculation of energy. Thus, the designated technical dilemma. But. And neprorabotannye things absolutely clear to those who can put two and two.

Valery Rozanov: Alina, the main issue is the power in this situation won or lost?

Alina Vitukhnovskiy: the Amazing phenomenon of the current government trying to reduce every situation to the control, the output it gets a whole bunch of unmanaged scenarios.

Thus, we enter the realm of absolute political chaos, neither good nor bad, but it’s better repeating a deliberate political dead ends.

In the chaos of poorly guided group, but well oriented subjects. The coming political era of actors, new players.

If you evaluate external factors, the prospects are even more tragic. Judge for yourself — a U.S. Senate Committee almost unanimously adopted the “Law on the economic security of Europe”, which in the case of a successful implementation will actually cut the gas the last straw for the Kremlin — the project “Northern stream — 2”.

This initiative was expected, we can say scheduled. How will this affect the economy of Russia? We will continue the isolation of the country from the gas market in Europe, while Asian fuel markets is already firmly occupied by other major suppliers.

In the future, we have a situation similar to 90s when the government, busy fighting within themselves and the partition of the remnants of the former luxury miss of control of social sphere and with it the political.

Thus, it is possible that now we are witnessing the last agony of the Kremlin’s power before her jaw completely open.

However, I would like to caution against optimistic compared to the 91-th year. The current situation in the country is unique and we have experience of resolving such conflicts. This time the power stranglehold clung to the property, which she managed to seize over the years of his reign.

At the time of the collapse of the Soviet Union power was the nomenclature, that is, she owned assets in fact but not legally. And now she owns them and is actually and legally. Property legitimized by its registration of numerous relatives and other affiliates.

Political and inevitably following from it the territorial disintegration of Russia today as an engine of change also doesn’t work, because inside it today no clearly defined national enclaves. And those that have, very much depend on the current government and the global economic situation.

Valery Rozanov: Alina, thank You for a brilliant analysis of the situation and given time!