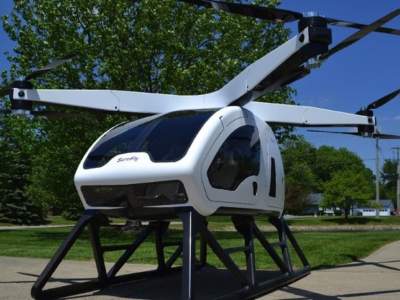 The maximum speed of the copter is 120 km/h

The American company Workhorse Group has introduced a passenger copter on the basis of the diesel engine.

Workhorse Group known as the developer and manufacturer of electric vehicles, and so it was surprising to see on their copter diesel engine. He may work as a generator, but the internal combustion engine on the copter looks not just old-fashioned, but also bad manners.

The developers explain the use of the diesel engine forced measure: this copter can only lift 180 kg of cargo and banal “will not pull” heavy batteries. But as soon as a battery with satisfactory weight and capacity characteristics, SureFly Octocopter them immediately get.

However, there is a diesel generator and the pros. For example, the copter can always fill in remote from civilization places where it is impossible to charge the batteries. And so, enough to bring a small canister of fuel and fly yourself to health even in the tundra, even in the desert.

However, removed from the centers of civilization is still not recommended, as the range of flight SureFly Octocopter is only 120 kilometers.

The body of the copter is made of carbon, it has eight electric motors, torque eight screws and safety battery capacity of 6 kWh, which would put SureFly Octocopter, if the fuel is suddenly over.

The maximum speed of the copter is 120 km/h, and the preliminary cost about 200 thousand dollars. Currently you can pre-order and transferred to the account of the Workhorse Group a thousand dollars.

However, the timing of supply of commercial drones is not yet known. Currently, the Workhorse Group is trying to obtain a certificate from the Federal aviation administration of the United States, without which the way into the sky the aircraft is closed.