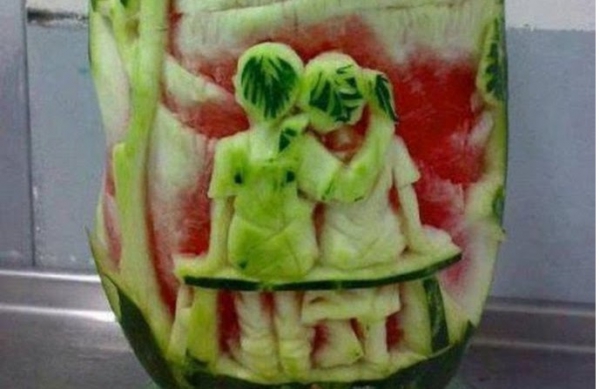 Forty years ago this carving vegetables was presented to the public as the highest skill of the chefs. And their work has been exhibited in competitions of culinary art.

But in recent years chefs such products have become quite common. Don’t even know whether the presence of carved watermelons on the tables of restaurants the inner need of their visitors or is an imitation of some fashion.

Perhaps this is a new trend in the development of public catering enterprises. But most likely, it’s just their fight for survival.

Despite our admiration for such a “masterpiece” of art must be eaten in the restaurant for hours (those are the rules of public catering enterprises).

Administrators, Maitre d’hotel and chefs of restaurants, probably, strongly suggest the customer Banquet dishes of carved fruits and vegetables, watermelon and melon, giving the carving the fashion trend of the restaurant business. Like, to have on your table the carved watermelon is “cool” !

Restaurateurs actively cultivate newly discovered niche. However, to decorate a table carved watermelons, fruits and vegetables was made in ancient times, for example, in the palaces of Eastern rulers. And now it is put on stream for wealthy Russians and those who wanted to look like that.

Aliens is still a more pragmatic and stingy people. So they aren’t going to order this “dish” in the restaurant and throwing money to the wind.

Of course, you can admire the carvings of watermelons. But these “creations” extremely prestigious assignment to decorate the tables of millionaires and those people who want to throw dust in the eyes.

Generally speaking I never in my life not only would not have booked a carved watermelon or cantaloupe in the catering business, but wouldn’t even there to eat them. But this is my personal opinion.

The fact that I often recall a popular song from the legendary TV series of the Soviet era:
– If someone somewhere we sometimes
Not washing hands wants
So…

Well, what can mean for our bodies someone’s dirty hands or dirty water, which is supposedly “washed” vegetables, watermelons, melons, beets, and carrots (hopefully not mixed together) it is better not to mention…

By the way, eat a watermelon or not, chefs do not care. Hand on heart, the most important for them and they were paid wages and underpaid “for diligence” in the preparation of the Banquet (in honor of the anniversary, wedding or “cut” the next billion rubles, or even dollars).

As I understand it, carved a watermelon in this photo, many people had to cause some kind of reaction. For example, for some it is a symbol of hope and love. And for the other – nostalgia for lost youth.

But, as the youthful many people have been through, now they can with a clear conscience to taste the watermelon.

Actually carving the watermelon, to be exact on the peel of watermelon is similar to a beautiful tray, which brought the flesh of a watermelon. So don’t pity the picture on the skin and that has long passed in your life, and just eat it.