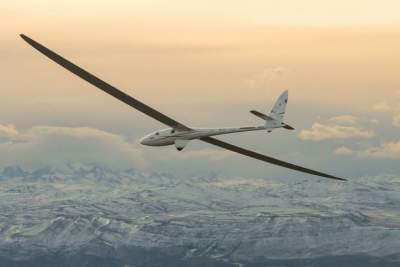 Perlan II testing began in August and will continue until the end of September and from the start of the test, the glider three times already a new world record, according to the website Aurbus.

It is noted that the flight pilots Jim Payne and Tim Gardner to the height 23202 meter surpasses even the highest recorded altitude of a famous spy plane of the U.S. air force. The U-2 aircraft under the control of the pilot Jerry Hoyt 17 APR 1989, rose to a height of 22.5 thousand meters.

Unlike U-2, Perlan II non-motorized, it only weighs 1500 pounds (816 kilograms) and soars to record highs due to the mountainous stratospheric air currents. These currents allow the aircraft without engines get very close to the border of space and earth’s atmosphere.

The strongest in the world updrafts occur near the Andes in Argentina, where mountain range faced the air mass South of the polar vortex.

“World records are evidence of progress in achieving the goal, but our goal is to gain knowledge and experience. Studying this part of the atmosphere, Perlan teaches us efficient flight at high altitudes, the discovery of natural sources of lift, teaches us to avoid turbulence. For the company that manufactures not only aircraft, but also high-altitude unmanned aerial vehicles such as the Zephyr, the Perlan is an investment in our future,” said Tom Enders, CEO of Airbus.

Glider Perlan II is sealed and insulated the cockpit, the wingspan of 25 meters and length 10 meters. Theoretically, the aircraft can climb to a height of 27 thousand meters, this cabin has a breathing mask.