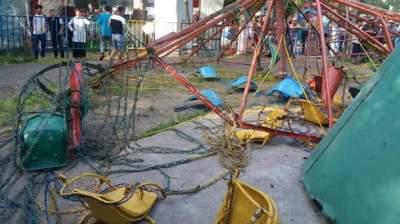 Attraction “the whirligig” collapsed while working together with the visitors in the Park of Navoi in the center of Osh city in Kyrgyzstan. Eight people were injured.

According to the newspaper, six people were hospitalized with various injuries. The state of one of the victims is a woman born in 1980 is estimated as heavy. Two people are in the Department of traumatology of city hospital, three children are in various locations.

Now there is an investigation of the incident. On this fact opened a criminal case under the article 142 part 2 of the Criminal code (“Violation of rules of a labour safety”).

We will remind, last autumn to the Australian amusement Park Dream World in gold coast in the accident killed four people.

And in February this year in Chongqing in southwest China at an amusement Park killed a 14-year-old girl.